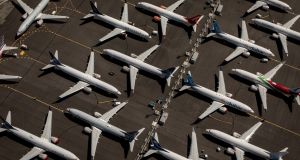 Boeing’s decision to temporarily halt production of its grounded 737 Max aircraft will slow growth but not necessarily hit profits at airlines that are waiting on hundreds of the new jet, one analyst says.

The US manufacturer will suspend production of the new craft in January. This means that the repercussions of regulators’ decision early this year to ground it following two crashes that killed more than 300 people will continue well into 2020.

Ryanair is one of the Max’s biggest customers, with a firm order for 135 of the craft and options on 75 more.

Irish-based aircraft lessors, including Avolon and SMBC Aviation Capital, are waiting on hundreds of the Boeing jet, which they intend supplying to airline customers in Europe, Asia and the Americas.

Stephen Furlong, analyst with Dublin stockbrokers, Davy, said the continued delay in the delivery of the craft would squeeze capacity in an industry that is already globally under-supplied.

He said that this would not necessarily hit profitability, as it would slow expansion in the number of aircraft seats available to meet demand from passengers.

However, Mr Furlong pointed out that the delays will hit growth at Ryanair. “This month they said they would grow by only 3 per cent in full-year 2021 to 156 million passengers,” he said.

Ryanair yesterday had not changed its forecast from earlier this month that it would have 10 of the new craft next year. It had expected that number to be 30.

Elsewhere in Europe, TUI and Norwegian Air are also waiting on deliveries of the Max. In the US, the delays have forced low-cost giant Southwest Airlines, to cut its schedule.

Mr Furlong agreed that the delays could hand some advantage to Ryanair competitors such as Easyjet and Wizz, which use Airbus aircraft, and so can continue growing. Airbus has hit delays of its own, although not as severe as Boeing’s.

Dublin-based aircraft lessor, Avolon, which buys planes from manufacturers and leases them to airlines, has ordered 139 Maxs from Boeing over the next five years.

“We are engaged in constructive discussions with Boeing on a go-forward plan,” a spokesman said.

Another substantial Irish lessor, SMBC Aviation Capital, has ordered 103 of the Boeing 737 Maxs, two of which have been delivered, but are grounded. It has four Maxs on sale and leaseback, which have also been grounded.

The company said it noted Boeing’s decision and stressed that passenger and airline employee safety was paramount and could not be compromised.

“We will continue to monitor the situation closely and remain in communication with Boeing regarding any further remedial action necessary to secure approval for re-entry to service of the aircraft when appropriate,” SMBC said.

Regulators will only allow the Max back into service once they are satisfied the software faults that caused the crashes earlier this year are dealt with and the craft is airworthy. The US Federal Aviation Authority could not say last week when this would be.

Analysts expect Boeing to lose as much as $1 billion a month despite its decision to pause production of the Max. The company, which builds the 737 near Seattle, Washington, in the northwestern US, said it would not lay off any of the 12,000 employees working there during the freeze.

JP Morgan analysts calculated that Boeing was burning almost $2 billion a-month on making the Max, but predicted that the pause would not eliminate this. They estimated more than half of those costs would remain because of internal overheads, staff costs and support for key suppliers including fuselage producer Spirit AeroSystems Holdings.

1 Johnny Ronan loses out on €315m Dublin docklands deal
2 Can Big Tech’s backing install Biden in the White House?
3 How long can Government afford to keep State pension age at 66?
4 Revenue accused of harassing businesses over Covid wage subsidy scheme
5 Give your home a smart makeover with some clever appliances
6 Ryanair and Aer Lingus to cut further flights from regional airports
7 Grafton Street landlord cuts high street property values by 26%
8 Apple iPhone 12 Pro: Well worth the wait
9 Updating an outdated concept in body armour
10 PTSB’s €1.4bn sale is a sign it is preparing for a fresh loans crisis
Real news has value SUBSCRIBE