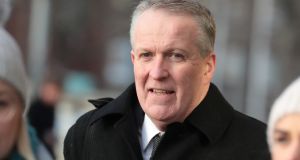 Ryanair’s case against departing chief operations officer Peter Bellew boils down to whether his non-compete clause with the airline can be enforced or not.

He is due to join the Irish carrier’s rival, British airline Easyjet, as its chief operations officer in June.

However, Ryanair maintains that when he accepted 100,000 share options in the company in 2018, he signed an agreement barring him from joining any employer competing wholly or partly with Ryanair in any market.

Bellew says that this is null and void, denies breach of contract and pledges to honour all his confidentiality obligations to Ryanair. He argues the share options to which the non-compete clause is tied are dead and gone, worthless and don’t exist.

The airline’s shares have mainly traded below the €14.40 at which the 2018 options were priced. Bellew argues that the profit-after-tax targets set by Ryanair as a condition of beneficiaries cashing in the options are “unattainable”.

Ryanair offered senior managers a new share option scheme, priced at €11.12, this year to replace the 2018 plan. However, chief executive Michael O’Leary told Bellew in March that he was withholding this from the chief operations officer unless he improved his performance over the coming six months.

The airline argues the 2018 share scheme is still very much alive and that some senior staff opted to keep it rather than take the 2019 options. Its lawyers pointed out several times that Bellew knew of the non-compete clause in October 2017, when he agreed to rejoin Ryanair from Malaysia Air, where he had been chief executive. In fact, Ryanair argues that Bellew understood the clause and accepted the clause when he signed it in June 2018.

Before the eight-day hearing began last week, both sides stressed the case was urgent, as Bellew was due to join Easyjet on January 1st. That implies that Mr Justice Senan Allen has a short time in which to weigh the evidence and the law before ruling. Nobody would envy him the task.