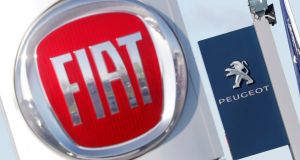 The deal will form a group with recurring operating profit of more than €11 billion and total vehicle sales of 8.7 million. Photograph: Reuters

Fiat Chrysler and France’s PSA, the owner of Peugeot, have struck a merger pact to create the world’s fourth-largest carmaker by output with combined revenues of €170 billion.

The two companies said they had signed a binding “combination agreement” that would result in an “industry leader” with greater scale and ability to invest in new technologies. Shareholders of each group would hold 50 per cent in the new entity.

The deal will reshape the car sector as it undergoes a period of transformation, with significant expenditure required to develop electric vehicles and self-driving systems.

It will form a group with recurring operating profit of more than €11 billion, a 400,000-strong workforce and total vehicle sales of 8.7 million, putting the manufacturer ahead of General Motors and Hyundai-Kia. In Europe, the company’s sales would even outpace Volkswagen, which has historically dominated the region’s industry.

No plants will close as a result of the merger, which the companies expect to lead to annual cost savings of around €3.7 billion. Based on their respective market capitalisations before Wednesday morning, the new entity will be valued at around €41.1 billion.

PSA’s Carlos Tavares will be chief executive with an initial mandate of five years, with John Elkann, scion of Italy’s Agnelli family that controls FCA, as chairman.

“Our merger is a huge opportunity to take a stronger position in the auto industry as we seek to master the transition to a world of clean, safe and sustainable mobility and to provide our customers with world-class products, technology and services,” said Mr Tavares.

PSA and FCA said they expected the transaction to complete within 12 to 15 months, subject to shareholder approval and regulatory clearances. The announcement comes after the companies confirmed at the end of October that they were pursuing merger talks.

Shares in PSA were up 1.5 per cent on Wednesday morning while FCA’s stock remained flat.

With a portfolio of brands covering the luxury, premium and mainstream passenger car segments, its marques will include Citroën, Opel and Vauxhall from PSA, with FCA contributing Jeep, Dodge and Alfa Romeo.

The biggest markets will be Europe, accounting for 46 per cent of revenues, and North America, generating 43 per cent of sales. Beefed-up purchasing power will account for some two-fifths of the cost savings, with a similar amount from improved efficiencies for investments in technology, products and platforms. The savings will result in a one-off cost of €2.8 billion.

The megamerger comes after merger talks between FCA and French rival Renault collapsed earlier this year.

For PSA, it marks a second high-profile deal in two years. The French carmaker bought Opel-Vauxhall from General Motors of the US in 2017 and has presided over a dramatic turnround at the carmaker.

To balance the value of the two companies, FCA will pay a €5.5 billion special dividend to its shareholders, while PSA will distribute the 46 per cent stake it owns in components supplier Faurecia to its investors. FCA, meanwhile, is working on a separation of its holding in robot-making unit Comau. Each company also intends to pay out a €1.1 billion dividend.

Upon completion, PSA shareholders will receive 1.742 shares in the new entity, while FCA investors will have one share each. Philippe Houchois, an analyst at Jefferies, said the final terms were “slightly improved” for PSA shareholders.

Shares in the new entity’s Netherlands-domiciled parent will be listed in Paris, Milan and New York.

There will be a seven-year standstill under which the group’s largest investors - the Peugeot family, Exor, BPI and Dongfeng, which has agreed to reduce its stake to 4.5 per cent - must maintain their shareholding.

Mike Manley, FCA chief executive, said: “This is a union of two companies with incredible brands and a skilled and dedicated workforce. Both have faced the toughest of times and have emerged as agile, smart, formidable competitors.” – Copyright The Financial Times Limited 2019