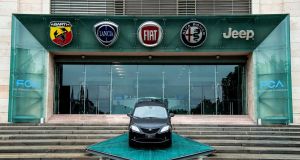 Fiat Chrysler and Peugeot maker PSA Group are aiming to sign a formal agreement next week to combine and form the world’s fourth-biggest car manufacturer, according to people familiar with the matter.

Progress is being made on the memorandum of understanding, even though some outstanding issues still have to be resolved, said the sources.

Ways to assess potential Fiat liabilities that have come to light since a broad outline of the accord was unveiled on October 31st are still under discussion, they said, adding that more than 100 managers are participating. PSA has planned a board meeting on Tuesday to consider the deal, one person said.

Representatives for Fiat and PSA declined to comment. The companies had said they aimed to sign an accord before the end of the year.

Following the unveiling of the merger plan, rival General Motors hit Fiat with a blockbuster racketeering lawsuit alleging a bribery and corruption scheme. Fiat has called the accusations meritless. JP Morgan analysts have estimated GM is likely to seek at least $6 billion (€5.4 billion) in damages, with the extreme scenario being as much as $15 billion.

In a separate development, Italian tax authorities claimed Fiat underestimated the value of its American business by €5.1 billion following its phased acquisition several years ago. Fiat has said it strongly disagrees with the finding, which could potentially lead to a levy of as much $1.5 billion.

Fiat shares gained in Milan on Thursday, giving the Italian American automaker a market value of €20.6 billion. PSA also closed higher in Paris, for a value of €19.4 billion.

A merger of Fiat Chrysler and PSA would create a regional powerhouse to challenge Volkswagen. Under the plan, the new company based in the Netherlands would be headed by PSA chief executive Carlos Tavares, while Fiat Chrysler chairman John Elkann would keep his role as chairman.

The combination would leave Tavares, who turned around PSA and the loss-making Opel brand acquired from GM, to figure out how to improve Fiat’s struggling operations in Europe. Fiat’s deep Italian roots, along with the French government’s 12 per cent stake in PSA, may make any plans to slim down the new entity more difficult. – Bloomberg

1 How can I view my dead brother’s will if I’m not the executor?
2 Investors pile into property as turnover in build-to-rent sector reaches €2.54bn
3 Kerry’s Chinese sales set for 30% hit from coronavirus
4 Provisional liquidator appointed to Dublin engineering firm
5 Analyst doubles projection for Tesla shares to $1,200
6 Bursting of Tesla bubble a case of ‘not if, but when’
7 Bank of Ireland staff in line for 2.95% pay increase
8 Flutter’s planned merger with Stars gets informal approval in Australia
9 Must you pay a price for ethical investment?
10 Finance Ireland plans stock market flotation in May
Real news has value SUBSCRIBE