Munster on the brink of elimination; Galway edge Mayo in penalty drama again 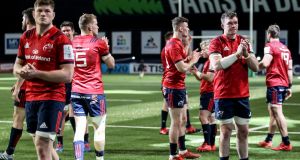 The Munster team after their Champions Cup defeat at La Defense Arena in Paris on Sunday. Photograph: Dan Sheridan/Inpho

For just the fourth time in the last 22 years, Munster stand on the brink of being eliminated in the pool stages of the Champions Cup after Racing’s 39-22 win over the province in the Paris Defense Arena yesterday. They now need Racing to beat Saracens in Allianz Park next Sunday to have any chance of finishing runners-up. Even then they will need two of the second-placed sides in the other pools to slip up next week. It was business as usual for Leinster as they extended their perfect record with victory against Lyon, with youngsters Caelin Doris and Max Deegan continuing to underline their international credentials.

Sergio Agüero overtook Thierry Henry as the Premier League’s highest ever overseas scorer with a hat-trick in Manchester City’s 6-1 victory over Aston Villa. His 177th league goal and 12th hat-trick helped Pep Guardiola’s team reclaim second place and move within 14 points of Liverpool who have a game in hand. In Sunday’s other Premier League encounter Roberto Pereyra, Abdoulaye Doucoure and Troy Deeney helped earn a third successive league victory for Watford, this time away to Bournemouth. In his column this morning, Ken Early reflects on Tottenham’s defeat to Liverpool on Saturday. Explaining why Spurs’ passing game may be a thing of the past with José Mourinho: “Spurs had two ways of attacking. One way was to steal the ball from a Liverpool midfielder, run forward and shoot. The other plan, the default plan for when Spurs started with the ball, reminded you of when a rugby team tries to work the ball back to a man waiting in the pocket for a drop at goal.”

1 A vegetarian and a non-drinker visit Ireland: here’s their verdict
2 Leaders’ debate: For one dramatic moment, the Taoiseach is like a rabbit in headlights
3 ‘I get paid to learn. I couldn’t recommend it enough’
4 Election 2020: Parties warned of ‘insane’ election promises as Varadkar offers Martin coalition
5 Miriam Lord: The left woos Mary Lou as FG tries to keep Ireland's nanas and granddads happy
6 Dolores O’Riordan’s former Howth home for €1.395m
7 Ireland has EU’s most progressive tax system, study finds
8 Who are Ireland’s 17 billionaires?
9 ‘In Ireland I’ve found another form of persecution’
10 New captain and new coach give Ireland a fresh Six Nations outlook
11 Michael Noonan: Fianna Fáil was not an innocent bystander in the crash
12 Rory Best regrets attending Belfast rape trial
13 Newton Emerson: Ruling Sinn Féin out of power in Dublin infantilises Stormont
14 Dublin council promised to drop claims for €12m ‘in return’ for white-water rafting grant
15 Fintan O’Toole: Historians will not believe sheer ignorance of Brexit supporters
16 Australia bushfires: Three killed as Canadian air tanker crashes
17 Man ordered to perform contract for sale of lands where he lives in Co Dublin
18 ‘I don’t know if he died . . . but I don’t want him in the Tuam tanks’
19 Election 2020: Varadkar tells debate he is open to coalition with Fianna Fáil
20 New coronavirus is increasingly likely to spread to EU, health bodies warn
21 Are there annual limits on inheritances or gifts to a child?
22 Eating out in Dublin – the homeless way
23 Targeting a Dáil seat like a military campaign
24 Doomsday Clock counting down remaining time left for civilisation
25 Terry Jones obituary: Monty Python’s heart and soul who revolutionised British TV comedy
26 Andy Farrell sidesteps Saracens issue at Six Nations launch
27 52 places to go in 2020: Here’s where the New York Times says you should visit
28 Apartment or house: which is the best buy?
29 Eyewitness to Auschwitz: ‘We were held in the wagons like animals’
30 What is the best exercise for you?
31 Election 2020 and farming: ‘All these places will be gone in the next 10 years’
32 Sonia O’Sullivan: Tracking the marathon Olympic journey of Aoife Cooke
33 New York Times’s spineless Democratic endorsement shows experts have lost their nerve
34 Irishman in Tasmania: Some friendships age well, while others, not so much
35 Davos Diary: UCD prof goes batty, Ivanka hits town and Prince Charles takes the stage
36 Microsoft Surface Pro 7: Hybrid device boasts impressive speed and performance
37 ESRI tax study, Shanahan in Davos and Fallon & Byrne expands
38 Rob Doyle: ‘Through writing, you can redeem even a disastrous life’
39 Election 2020: Top secret briefings and Waterford’s WLR FM
40 Election 2020: Record share of women running for Dáil seats
Real news has value SUBSCRIBE