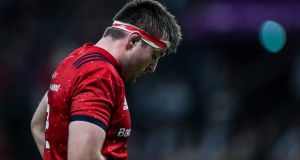 A dejected Niall Scannell of Munster after the Champions Cup defeat to Racing 92 at the Paris Defense Arena. Photograph: Billy Stickland/Inpho

Perhaps it takes a rare setback to appreciate Munster’s extraordinary consistency in the Heineken Champions Cup. For just the fourth time in the last 22 years, they stand on the brink of being eliminated in the pool stages after Racing’s 39-22 win over the province in the Paris Defense Arena yesterday.

The net effect means Racing have topped Pool 4 and secured a place in the quarter-finals. They may need a win to ensure a home quarter-final, and Munster will need them to beat Saracens in Allianz Park next Sunday to have any chance of finishing runners-up.

Even then they will need two of the second-placed sides in the other pools to slip up next week, ie two from Northampton away to Lyon, Glasgow away to Sale or Gloucester away to Toulouse. In all likelihood, their goose will have been cooked come kick-off at home to the Ospreys next Sunday.

“We might get lucky, we might sneak in off the back end,” said Johann van Graan in a rare note of optimism in the wake of this defeat. “The only thing we can control is our performance at Thomond Park next Sunday and I would like to believe we will perform like we did tonight.”

In so many ways Racing appear to be operating at a different level. Long after the final whistle many of their supporters, in what had been, actually, a sparse enough attendance disguised by the darkened upper tier, were still cavorting to the rhythmic beats of dance music at the far end of the ground from the giant screen which is reserved for the post-match party.

Racing’s performance, like the cinematic, indoor Paris Defense Arena, was underpinned by their billionaire backer Jackie Lorenzetti, whose production of fine wines would go well with the mantle of European champions.

Whatever the vast discrepancy in the respective budgets, it had been evidenced in the ridiculous carrying and offloading game of Virimi Vakatawa, the finishing of those arch poachers Teddy Thomas and Juan Imhoff, and then, with Munster still manfully keeping the game in the balance, the power off their bench.

Going into the last 10 minutes before Racing’s three-try salvo, Munster’s performance showed they may have a good team, but have nothing like the strength in depth of their hosts. Throw in the financial clout of Saracens, whose breach of the salary cap casts a cloud over their back-to-back titles and prospective presence in the quarters. Munster’s group was something of a financial mismatch.

“It’s hard to be thinking about it now,” said a bitterly disappointed Peter O’Mahony, “but this group has always had huge belief and you talk financially but we always have something different in that we have a huge group of players who have come from the province and who have come through our academy systems.

“It always has made a difference and we’ve always complemented that by signing some excellent players from overseas and we have that mix now, and that’s always a dangerous mix, the guys who we have there and signing well, which we have done.

“We’ll continue to do so and that’s what makes our club special, is what I’ve just said. They didn’t all come from Racing. It’s a different dynamic. We need to change some things. We need to do things better. As Johann said we need to take our chances, that’s the 15 guys on the pitch.

“It’s a different ball game if you score after 60 minutes and you go nine points ahead. They’re chasing a little bit and as you see when you chase a game you can make mistakes against guys like that and they punish you straight away. There’s little improvements that we can make that will make us better next weekend, not next season. So that’s our focus now.”

If it transpires that Munster don’t make the quarter-finals, it won’t have been entirely because of events here. They left three points behind when JJ Hanrahan, who kicked superbly here and played very tidily, missed a last-minute drop goal in the drawn match with Racing and they declined a shot at goal for a bonus point in the loss at Saracens. But for that, they’d still have their destiny in their own hands, just about.

“You’ve seen however long this competition has been going it’s about grabbing what you can get,” admitted O’Mahony. “You’ve seen those things and that point has made all the difference. Again, we probably weren’t clinical enough at home against these guys. You can’t just say tonight was the reason we won’t qualify but again we’ll endeavour to perform next weekend.

“That’s paramount for us now. It’s hard tonight but we will regroup and put a plan together for next weekend. It’s going to mean a huge amount to us to perform next weekend.”

Earlier in the day, Leinster cemented their grip on the top seeding in the last eight with a six-try, 42-14 win over Lyon at the RDS. A victory of any kind, in their tricky trek to Treviso next Saturday, will ensure them of that top seeding and with it both a home quarter-final and, should they win that tie, home country advantage in the semi-finals as well.

There is a chance that should Saracens beat Racing at home next Sunday, and the reigning champions go into that game effectively knowing that a win, with a bonus point, ought to ensure as much, Leinster will meet them in a repeat of last season’s final.

More likely though, on the premise that Toulouse complete a sixth win in six – after ending Connacht’s feisty competitiveness in the competition in Galway on Saturday – by beating Gloucester in the final round of games next Sunday afternoon, Saracens would then advance as the second best runners-up, or in other words the seventh seeds.

In that scenario, albeit on the presumption that Northampton beat Lyon away next week, Leinster may meet their east midland pool rivals again in the quarters.

Whoever they face, Leinster’s frontline team will not play together again between next week’s trek to Italy and the quarter-finals as, unhelpfully, they have a two-week trek after the Six Nations to South Africa in the Pro14.

“That’s just the way it’s geared up, which is great in many ways,” said Leo Cullen. “It keeps it fresh and new. The two weeks prior to the quarter-final we’re in South Africa, so that’s the lead-in that we’ll have. There are lots of things that we’ll need to consider, but for now it’s just a six-day turnaround into Treviso and how we manage that.”

Munster’s defeat yesterday had echoes of Ulster’s loss in Clermont Auvergne on Saturday, a victory which means Clermont can seal first place in the pool by winning in Harlequins next Saturday.

But at least Ulster know that, as the best second-placed side, a victory at home to Bath on Saturday is guaranteed to ensure the best runners-up slot and sixth place seeding. With that would come an away quarter-final against, possibly, Toulouse or Exeter.