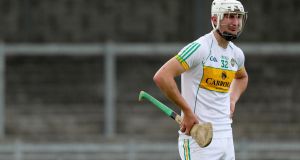 There was a dramatic ending as Offaly added their name to the Kehoe Cup roll of honour by snatching victory with an Oisín Kelly injury-time point after a hard-fought and exciting decider at Páirc Tailteann in Navan on Sunday .

The Faithful County led all the way until substitute Daniel McCloskey blasted to the net for an equalising goal for Antrim three minutes into added time. With a penalty shootout set to decide the issue Offaly staged one final attack and Kelly worked himself into a scoring position before splitting the posts.

Offaly raced into a three-point lead in the early stages and remained ahead despite some very erratic finishing. They tallied 18 wides, eight of which came in the opening half, at the end of which they led 0-9 to 0-7.

Neil McManus accounted for five points for Antrim in that period and the Glensmen remained in touch throughout.

Substitute Brian Duignan, son of Offaly county chairman and former star Michael, made an instant impact with a goal within 30 seconds of his introduction on 62 minutes.

That left his side leading 1-15 to 0-13 but Antrim showed great resolve in the closing stages as midfielder Keelan Molloy took his tally of points to five before McCloskey struck for the equalising goal which proved to be in vain.