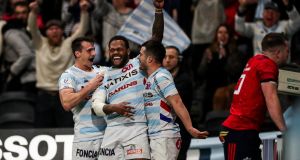 The final scoreline hardly tells the tale of this absorbing contest, but then again it was hard to argue with as well. Munster were brave beyond doubt, and even led inside the final 10 minutes before Racing sprinted to the finishing line with a late triple whammy.

Ultimately too, a try count of four to one – with Munster’s coming from an intercept – was also hard to argue with.

The net effect means that Racing have topped Pool 4 and secured a place in the quarter-finals. They may need a win to ensure a home quarter-final, and Munster will need them to beat Saracens in Allianz Park next Sunday to have a chance of finishing runners-up.

Even then they will need two of the other pool second-placed sides to slip up next week, ie two from Northampton away to Lyon, Glasgow away to Sale or Gloucester away to Toulouse. In all likelihood, their goose will have been cooked come kick-off at home to the Ospreys next Sunday.

Ominously, Racing always had the better of the collisions and the gainline, and had already looked more potent from the second quarter on. Then with the game still in the balance, had way more oomph off the bench. Tellingly, although visibly wilting, Munster only made a quartet of replacements with the game up in the 78th minute.

Heaven knows the discrepancy in playing budgets between these sides – not to mention Saracens – but it was neatly summed up in Racing bringing on Maxime Machenaud at scrumhalf whereas the IRFU decreed that Alby Mathewson was surplus to Munster’s requirements after the initial draw between the two at Thomond Park in November.

A sizeable contingent from the Red Army would only have been encouraged when news filtered through that an unwell Donnacha Ryan, who had been named on the bench, had been ruled out, and also by their team’s start.

Hanrahan ran back Teddy Iribaren’s first kick and with David Kilcoyne, particularly, injecting real oomph into his carries, Munster went through over a dozen phases.

Racing went offside, in truth for about the fourth time, for Hanrahan to open the scoring, and when Juan Imhoff knocked on a quick throw by Finn Russell, the Parisians were pinged for whipping the scrum and Hanrahan doubled the lead.

Better still Henry Chavancy compounded a knock-on from Racing’s first wave of attacks by clearly not rolling away under his posts as Munster ran hard at the gainline and recycled inside the Racing 22 off a lineout.

Hanrahan made it 9-0 and at this point the penalty count was 4-0, but this was undone by Jean Kleyn inanely and blatantly blocking Iribaren and the scrumhalf picked himself up to make it 3-9.

When Dominic Bird picked off a hurriedly taken Munster lineout, twice Racing pounded at the Munster defence, with Virimi Vakatawa’s strength and offloading causing havoc. When Russell gathered another offload with Teddy Thomas one-on-one on the outside, Russell was penalised for not releasing in the tackle – a brilliant one by Peter O’Mahony.

But Munster’s box kicking was only serving as a starting point for Racing’s attacks into the big screen end, whether the back three and Russell gathered in the air or opted for quick throws. They had to go into the crowd.

One of Russell’s cheeky chips led to Mike Haley having to concede a five-metre scrum under pressure from Imhoff.

When Racing attacked off a strong scrum through Antonie Claassen’s pick-up the move seemed to have come to an end when Vakatawa dropped the ball in midfield. Iribaren picked it up and, with Haley blocking his left to right pass, the scrumhalf turned and slung an underarm pass off his right hand fully 30 metres to give Thomas a walk-in try.

Vakatawa’s dropped ball was not deemed a knock-on after recourse to video replays, and although Iribaren’s missed conversion left Munster in front, it was looking ominous. When O’Mahony was pinned at a Racing ruck and was pinged by Wayne Barnes, Iribaren kicked Racing in front.

A nice starter play was ended by Vakatawa deliberately knocking on Haley’s pass for Chris Farrell. It should have been a yellow, but although Hanrahan had the legs from 47 metres, the ball drifted slightly wide.

Haley kicked out on the full, badly, but atoned with a try-saving tackle when clinging onto Imhoff’s left leg after the winger cut through off Russell’s inside pass. A try still looked likely when Racing subsequently had a three on one only for Andrew Conway to pick off Chavancy’s pass for Vakatawa and sprint untouched from 80 metres out to score. Hanrahan converted and, somehow, Munster were 16-11 ahead at the break.

A lineout steal by O’Mahony and a penalty against Bird had Munster on the front foot but Stephen Archer was pinged for a neck roll. Racing kept winning the gainline with their carries, and when a O’Mahony and Archer were both offside, Iribaren tapped over the penalty.

A superb counter by Keith Earls, offloading to the supporting Jack O’Donoghue, led to Russell coming through on Conor Murray and Hanrahan, with a tricky angled kick, restored the five-point lead.

Munster daringly worked an overlap inside their own 22 but Haley’s pass was picked off one-handed by Imhoff, and after Barnes dubiously deemed Hanrahan’s rip constituted a knock-on, Murray was pinged for a high tackle. Iribaren kicked the penalty as he did when Niall Scannell was penalised for a deliberate intercept after Russell did CJ Stander like a kipper to put Racing 20-19 in front.

However, Haley’s fine take, and Conway’s kick and chase forced Iribaren to concede an attacking lineout. After a nice lineout play to launch Stander, Farrell was held up over the line by Vakatawa. With a penalty advantage for a collective offside, Murray’s pass seemed to be deliberately knocked on by Imhoff and the recipient, Billy Holland, was infuriated. But Barnes did not look at it again, Munster had to settle for Hanrahan’s three-pointer, a huge reprieve for Racing.

Camille Chat ended a prolonged Munster attack, stunted by two abysmal Kleyn passes, for Russell’s long kick to earn an attacking lineout and when the outhalf’s pitched crosskick with a penalty advantage seemed to have too much juice on it, Thomas contrived a wondrous one-handed touchdown in the very corner of the in-goal area.

Munster went through the phases in the middle third of the pitch, but mostly went backwards, before Wenceslas Lauret won the game’s decisive turnover. Vakatawa beat Haley on the outside and dummied Conway to score untouched, Maxime Machenaud converting, as he did when Imhoff skipped through for Racing’s bonus-point try.