Ken Early: Spurs’ passing game may be a thing of the past with Mourinho 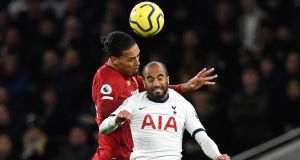 Lucas Moura of Spurs and Liverpool’s Virgil van Dijk. The Spur’s striker was giving up 20cm in height and 20kilos in weight to Van Dijk. It didn’t look like a formula for success. Photograph: EPA/Neil Hall

It has become a cliche to say José Mourinho has run out of new ideas. Yet on Saturday evening he proved that he can still show fans things they have never seen before.

For the first time since Mauricio Pochettino arrived at Tottenham in the summer of 2014, a Spurs home crowd got to watch the opposing team pass the ball 796 times. In all that time the closest any team playing away at Spurs has got to Liverpool’s Saturday total was the 684 passes recorded by Barcelona in their 4-2 win at Wembley in the autumn of 2018.

The football data website Instat Scout only records these statistics in depth from the summer of 2014 on, but since Liverpool’s tally is a record for that period it’s a fair bet that it’s a new all-time record as well. So Mourinho is already writing new pages of Tottenham history.

You might already be thinking: who cares? You don’t win any prizes for making a lot of passes, and quite often the team that makes fewer passes wins the match.

This is all true, and the passing figures are not important in themselves. They do, however, illustrate a change of emphasis that can already be detected at Spurs since Mourinho took charge 13 matches ago.

In Pochettino’s last 13 matches in charge – the run of form that ended with his sacking – Spurs averaged 570 passes per match. In Mourinho’s 13 matches that average has fallen by one-eighth to 504, and they have only twice beaten the late-Poch average of 570 – against Middlesbrough and Norwich. The drop in the number of passes reflects Mourinho’s preference for a more reactive, direct long-ball game.

Spurs made 388 passes on Saturday. Pochettino’s Spurs made fewer than 388 passes only 10 times in his 293 games. These performances mostly happened away from home at difficult grounds – twice at Liverpool, twice at Manchester City, twice at Arsenal and once at Real Madrid.

At home Spurs had fewer than 388 passes only three times under Pochettino: against Chelsea in 2018, and against Liverpool and Borussia Dortmund in 2017. These three matches have a couple of things in common. Each time Spurs won after taking the lead in the first few minutes.

In all Pochettino’s time at Spurs, in all competitions, home and away, there was only one match in which his team allowed the opponent to play more passes than Mourinho’s Spurs allowed Liverpool.

It happened in the Champions League second-round second-leg away to Borussia Dortmund last season. Dortmund had 797 passes that night, one more than Liverpool did on Saturday. Spurs won 1-0 with a Harry Kane goal on the counter, as though to underline the point that you don’t need to win the passing to win the match.

The thing to remember about that match was that Spurs kicked off already 3-0 up on aggregate from the first leg, so it made sense for them to sit back, let Dortmund have the ball, and hit them on the break.

On Saturday, Mourinho set his team up as though they were defending a healthy aggregate lead rather than starting from 0-0. Mourinho drafted in 20-year-old defender Japhet Tanganga because “he’s fast”, while Serge Aurier and Son Heung-Min were tasked with controlling the threat from Liverpool’s full backs. Harry Winks, Christian Eriksen and Dele Alli were in midfield, with Lucas Moura as the lone attacker.

With this line-up – 4-5-1 verging on 6-3-1 – Mourinho reminded you of the old general who wants to fight the new war with the same tactics that won the last one.

When he managed Manchester United he got some results against Liverpool using this template – a couple of 0-0s at Anfield and a 2-1 win at Old Trafford in 2017-18. The idea was to close the spaces at the back, slow the game down, make sure Liverpool didn’t have the chance to counter-attack, and hope to take advantage of the defensive mistakes Liverpool could be relied on to cough up in every match.

But Liverpool have changed. A defence that used to include names like Clyne, Moreno, Mignolet, and Karius is now based around Van Dijk, Gomez, and Alisson. The goalkeeper is better on the ball than some of the defenders Jürgen Klopp inherited from Brendan Rodgers. These players have the technique and confidence to run the game from the back, and they no longer make many mistakes.

The days of Liverpool wanting the game to be “wild”, to use a Kloppism, are over. This team prefers to pin the opposition back and calmly take them apart.

You now have a better chance against them in a “wild” game. A side that sits back and lets them have the ball, as Spurs did on Saturday, is actually playing into their hands.

Spurs had two ways of attacking. One way was to steal the ball from a Liverpool midfielder, run forward and shoot. The other plan, the default plan for when Spurs started with the ball, reminded you of when a rugby team tries to work the ball back to a man waiting in the pocket for a drop at goal. Time and again Spurs passed backwards to a defender who would launch a long ball towards Lucas Moura.

Lucas did his best to take the game to Liverpool all by himself. You could see why Mourinho likes him: he is fast, skilful, energetic and tenacious. He may never have worked harder than he did on Saturday. He made 30 challenges in the game – at least twice as many as any other player on the field. Some 10 of those were aerial challenges as he jumped for corners or contested those long balls from the back.

As 5ft 8in wingers go, Lucas is exceptional in the air. He’s good at reading the flight of the ball and timing a running jump to get there before a taller opponent. It is a skill he demonstrated in scoring Spurs’ second equaliser with a header from a corner away to Manchester City earlier this season.

However, against Van Dijk he was giving up 20cm in height and 20 kilos in weight. It didn’t look like a formula for success.

Was it even designed to be? Did Mourinho really believe he could get a result against Liverpool with that 2016-edition game plan, or by playing a 5ft 8in player at centre forward and leaving Troy Parrott out of the squad entirely?

Was he sending a message to Daniel Levy about the importance of signing a new striker this month, a new target man around whom his long-ball game can be structured while Harry Kane is out injured?

Either way it looks as though Spurs fans will be seeing fewer and longer passes from now on – unless the other team is on the ball.