Walsh Cup: Galway come out on top after trading blows with Dublin 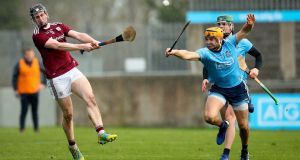 The scoreline suggests drama but the reality was something more benign as Galway hung firm in the Walsh Cup to get the Shane O’Neill era off to a winning start.

Cathal Mannion’s 69th minute point, his third of the game, ultimately proved the winner though it was more a victory for collective endeavour on a sticky pitch in mid-winter.

Remarkably, the teams shared out 14 points evenly in the second-half, trading point for point all the way through the 35 minutes or so, meaning Galway retained their one-point half-time lead at full-time.

It was a curious tit-for-tat scoring pattern with neither side able to break away at any stage for two in a row.

So as narrow as a one-point win is, it seemed almost an inevitable outcome throughout the final quarter as Galway held on to set up a repeat of last year’s final with Wexford.

“You can’t beat games,” said O’Neill of the prospect of another outing next weekend before the Allianz League. “You could see it out there, guys were out on their feet at the end on both sides, it’s very hard or virtually impossible to replicate that in training.”

Mattie Kenny, a former All-Ireland club title winning manager like O’Neill and a one time Galway selector, didn’t seem too disappointed in defeat.

He was without 14 players due to the Fitzgibbon Cup and while his team failed to replicate last June’s Championship win over Galway at the venue, they battled hard for the duration.

Galway, perhaps unsurprisingly with a new look side including rookies Diarmuid Kilcommins - who hit two tidy points - Declan Cronin and TJ Brennan, took their time to get going.

Dublin, with three games under their belt in the competition, were 0-7 to 0-3 up after 17 minutes and retained that four-point lead after half an hour.

Galway finally found their range to reel off five points in a row, including two beauties from Mannion, to lead 0-12 to 0-11 at half-time and it was a lead they wouldn’t relinquish.

The visitors looked at 21 different players in total. Joe Canning and Conor Whelan were named among the subs but weren’t called upon.