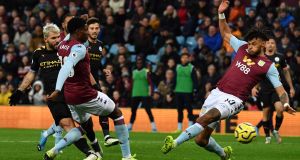 Manchester City reclaimed second place as Sergio Agüero crowned himself the highest overseas scorer in Premier League history, his hat-trick here taking him past the record previously held by Thierry Henry. The Argentinian forward has plundered 177 league goals since joining Manchester City in 2011 and, given the way his game has developed under Pep Guardiola, has done a lot more besides.

He helped create the first of Riyad Mahrez’s two goals here, for instance, with his fellow forward Gabriel Jesus also finding the net on an afternoon when Aston Villa performed so badly that several unwitting assists could be attributed to them. Anwar El Ghazi’s late goal from the penalty spot did not dilute their humiliation.

City were 4-0 up at half-time before Agüero added two more goals in the second period to make sure that his career statistics reflect his greatness.

The only positive that Dean Smith, the Villa manager, could salvage from the rubble of this performance was that it strengthened the case for using this month’s transfer window to procure players who could immediately fill the holes ripped in his team by injuries. One prospective signing, the former Liverpool goalkeeper Pepe Reina, was at Villa Park to run the rule over his new teammates before completing a loan move from Milan. If the reason for his wanting to come here was to get more action, he will have been reassured. Whoever keeps goal for Villa will be very busy indeed if their outfield players continue to dither as much as they did here.

Another loan signing, Danny Drinkwater, was cast straight into the starting lineup after arriving from Chelsea and he must have wondered what he had let himself in for. At least he had an excuse for looking off the pace, this being only his seventh league start since his £35m transfer from Leicester to Chelsea in 2017. Smith evidently does not put much stock in omens, as Drinkwater’s only previous Premier League appearance this season was a heavy defeat to Pep Guardiola’s team last month in his sole outing for Burnley, where his loan spell flopped. His last appearance for his parent club, Chelsea, was also against City and also ended in defeat. Villa, then, are investing some of their survival prospects in the ability of Drinkwater to revive his career at the club. Things, they hope, can only get better after this.

Drinkwater and an alarming number of his new teammates were notable for their inability to keep up with their opponents here. The home side practically assumed the role of helpless onlookers as City strolled into a three-goal lead in the first half an hour.

Although the afternoon began inauspiciously for Villa, as they sank into the bottom three before kick-off as a result of Watford’s win at Bournemouth, they might have thought luck was going to smile on them when a slip by Agüero let Ezri Konsa off the hook after the defender has given the ball away with a loose pass. But they were disabused of that notion within two minutes, as a lovely individual goal by Mahrez heralded the start of the rout.

Mahrez collected the ball about 35 yards from goal after De Bruyne let a pass by Agüero run to him. Then Villa were equally generous, with Drinkwater seemingly unable to do more than chug along behind the attacker, who waltzed into the penalty area unchallenged before using Kortney Hause’s body as a shield and slotting a low shot past the unsighted Ørjan Nyland.

Rather than wake up Villa, that seemed to render them even more passive.

Six minutes Agüero took advantage of dawdling by Ahmed Elmohamady to prod the ball back from the byline; it landed at the feet of Drinkwater, whose lack of sharpness was exposed by David Silva, who nipped in to relieve him of the ball and feed Mahrez, who swished it into the net from 10 yards for his second goal.

Villa deteriorated. Jesus fired just over the bar after a mistake by Konsa in the 26th minute. City soon came back for more, scoring their third before the half-hour mark. De Bruyne breezed past Drinkwater in midfield before finding Agüero, who brushed aside Douglas Luiz before blasting into the net from 20 yards to equal Henry’s record. There was no chance of him stopping at that.

Jesus got in on the act before half-time, converting at the back post after De Bruyne had again been allowed to canter through midfield and deliver a superb low cross.

City created chances to increase their lead before Agüero did so in the 57th minute. Again De Bruyne motored past almost stationary Villa midfielders to supply David Silva, who slipped the ball through to Agüero. The striker held off Elmohamady and sidestepped Tyrone Mings before slotting into the net. He completed his hat-trick nine minutes from time after Hause gifted the ball to Mahrez, who helped it on to Agüero, who, inevitably, made no mistake.

City’s clean sheet was besmirched when Ilkay Gündogan tripped Trézéguet. El Ghazi netted from the spot but there could be no wiping away Villa’s problems. - Guardian