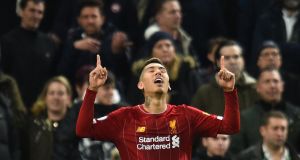 Liverpool passed a stern test in their quest for Premier League invincibility as they beat a plucky Tottenham side 1-0. The Reds, marching towards a first league title since 1990, took another step closer to matching Arsenal’s 2003-04 achievement thanks to Roberto Firmino’s first-half strike.

It took their winning run to 12 matches and they are now undefeated in their last 38 games, going back to January 3rd, 2019 - a period in which they have won an astonishing 104 points. That defeat to Manchester City proved pivotal in last season’s title race but it will take a miracle for them to miss out again as they continue to sweep aside all before them with a 20th win from 21 games.

Losing to this Liverpool team is no disgrace, but Spurs were worthy of a point as they asked tough questions of Jürgen Klopp’s men after the break. They had two big chances to claim a draw and how they would have wished for Harry Kane in their side as Son Heung-min and Giovani Lo Celso inexplicably missed the target. But it was back-to-back league defeats for Jose Mourinho’s side and - depleted by injuries - the top four is now looking a tough ask, sitting nine points behind Chelsea.

Mourinho said before the game that only two people - him and his press officer - believed Spurs could win, but he had a plan, handing 20-year-old Japhet Tanganga his first Premier League appearance in defence. Tanganga justified his surprise selection with less than two minutes on the clock as he produced a brilliant goal-saving block on the line after Firmino appeared destined to score after breaking clear. The hosts then had some luck as Firmino’s follow-up rattled they post as they escaped going behind early on.

Having no Harry Kane, who tweeted during the game to say his operation on a potentially season-ending hamstring injury has gone well, meant that Spurs had to find different ways to attack and both Son and Lucas Moura had chances after drifting in off the wing, but their radar was off.

Liverpool began to take control, with Virgil van Dijk missing a good chance, and although Tanganga had been impressive, he was schooled by Firmino for a brilliant opener. The Brazilian knew a tackle was coming and produced a fine turn before lashing in his seventh league goal of the season - all coming away from home. It looked ominous for Spurs, but they came to life in the second half with a rousing performance. They were far more creative as Son had a deflected effort just wide while Serge Aurier fired straight at Allison.

Liverpool posed a threat on the break, but it was Spurs who were pressing and they were presented with two golden chances to level. The first was laid on a plate to Son in the 75th minute as Moura played him in, but the South Korean blazed his shot over from 12 yards. Mourinho’s men kept going and an even better chance landed at the feet of Lo Celso seven minutes later, but somehow he managed to steer Aurier’s cross wide from inside the six-yard box. Erik Lamela and Son both tested Allison again but Liverpool came through it in all-too-familiar fashion.

1 Conor McGregor hails Donald Trump as ‘USA goat’
2 Gerry Thornley: Saracens very late to apologise for repeated cheating
3 Talk of Celtic’s title demise is ‘very premature’, says Neil Lennon
4 Champions Cup final: How to get there, how to get tickets and more
5 Leinster to face Saracens, the opponents nobody wanted
Real news has value SUBSCRIBE