Conor Dunne opts for punditry after end of pro career

Meanwhile, Sam Bennett is the first Irish rider in action in 2020 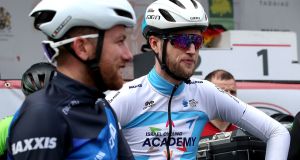 Conor Dunne’s recent announcement of the end of his professional career has been followed by the disclosure that he will go into a career in broadcasting. The 2018 Irish road race champion competed last season with the Israel Cycling Academy team, moving there after the collapse of the Irish Aqua Blue Sport team.

He is just 27-years-old but was unable to secure a contract extension with the squad after it recently merged with Katusha Alpecin.

Dunne stated this week that he will begin working for the Global Cycling Network. The internet broadcaster has utilised former pro riders since its inception, and Dunne will share the experience he built up while competing in races such as the Giro d’Italia and Vuelta a España.

Meanwhile Ireland’s other professionals are fine-tuning their form in advance of the start of the 2020 road race season. Sam Bennett will be the first in action, lining out in the Schwalbe Classic on Sunday week. The criterium is a warm-up event prior to the start of the Santos Tour Down Under the following Tuesday. No other Irish riders are expected to line out in the event.

In other news, Cycling Ireland has announced a push to pinpoint and develop future talent via a Road and Track Development Programme. The federation is seeking applications from riders born in 2002 and 2003 and who have the desire to work towards elite status. They should be in good physical health, have a growth mindset, and be available to attend regular seminars and training workshops. Previous competition experience is preferred.

Finally CI’s national cyclocross championships will take place in Enniscrone on Sunday. The course will feature flat terrain but also a grassy banked area which will subject riders to short climbs, running sections and tricky descents.