Moura saves the day for Spurs against Boro, Chelsea too strong for Forest 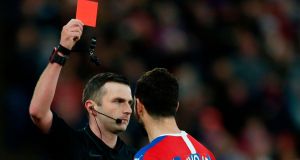 Wayne Rooney helped Derby cause an upset at Crystal Palace to reach the FA Cup fourth round on an afternoon where the pitchside monitor was used for the first time in England.

Referee Michael Oliver watched a replay of an incident between home captain Luka Milivojevic and Tom Huddlestone and overruled his original decision of a yellow card to send off the Eagles skipper midway through the second half.

One-time Palace loanee Chris Martin scored the only goal against his former club and it proved enough to dump Roy Hodgson’s side out of the competition following a 1-0 defeat at Selhurst Park.

Lucas Moura kept Tottenham in the competition as he prevented a third-round shock at the hands of Championship side Middlesbrough.

Boro – managed by Jonathan Woodgate who headed Spurs to victory in the 2008 League Cup final – took a 50th-minute lead through Ashley Fletcher’s sixth goal in 11 games.

But Jose Mourinho’s men hit back within 11 minutes when Brazilian Moura headed firmly past Tomas Mejias to secure a 1-1 draw and a place in Monday evening’s fourth-round draw.

Tottenham were well worth a replay on the balance of play on a day when the injured Harry Kane’s absence blunted their attack, but Boro equally deserved another crack after a spirited display against last season’s Champions League finalists.

The 19-year-old England forward drilled home the opener then had a hand in Ross Barkley’s facile finish as Frank Lampard’s side coasted into the fourth round.

Forest had a penalty chalked off after a Video Assistant Referee review, and Ryan Yates’s header ruled out for offside.

But this still remained a comfortable Chelsea win, and one to leave head coach Lampard eyeing an upturn in home form.

A much-changed Sheffield United side did not repeat the mistakes of last year as they overcame AFC Fylde 2-1.

Chris Wilder, who made 11 changes, saw his team go out of the competition at this stage last season as National League Barnet caused an upset at Bramall Lane.

The Blades hosted opposition from the same division again on Sunday but this time avoided a giant-killing thanks to Ireland striker Callum Robinson’s early goal and a Leon Clarke strike on the hour.

However, the lowest-ranked team remaining in the competition made the Premier League club sweat by setting up a tense finale when Jordan Williams pulled a goal back with 12 minutes left.

Conor Chaplin’s second-half header and a late breakaway from Luke Thomas ensured Championship strugglers Barnsley progressed to the fourth round for the first time in seven years with a 3-1 win at Crewe.

The Yorkshire side were ahead as early as the third minute after a fine piece of finishing from Jacob Brown, but the League Two side levelled though veteran Irish midfielder Paul Green.

Jordan Hugill scored twice as QPR thrashed Swansea 5-1 to comfortably secure a place in the fourth round.

In-form Bright Osayi-Samuel also netted for Rangers, who are on a roll following the recent 6-1 hammering of Cardiff and were three up by half-time.

Substitute George Byers netted for Swansea in the second half but Lee Wallace’s brilliant volley with 14 minutes remaining and an even better strike from Josh Scowen in added time completed the rout.

Kenneth Zohore’s first-half winner booked West Brom a fourth-round spot at the expense of Championship rivals Charlton with a 1-0 success at The Valley.

In the day’s late kick-off West Ham’s new manager David Moyes watched his team win 2-0 in Gillingham thanks to second half goals from Pablo Zabaleta and Pablo Fornals after a shaky start against their League One opponents.