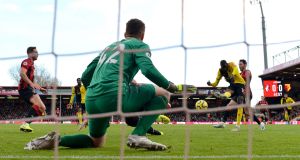 When Watford appointed Nigel Pearson last month, the carnival atmosphere that emanated from the away end at full-time would have represented the stuff of dreams.

The travelling supporters deliriously preached Pearson’s name after watching a revitalised Watford dismantle Bournemouth to leap outside of the relegation zone for the first time this season, with the substitute Roberto Pereyra wrapping up another delightful day’s work after goals by Abdoulaye Doucoure and Troy Deeney helped earn a third successive league victory, racking up another clean sheet in the process.

As for Bournemouth, the reality is they are engulfed in a relegation scrap after accumulating just four points from the last available 33. They trailed at the interval, by which point any fillip from the return of Nathan Ake after a month out with a hamstring injury had been long forgotten, instead trumped by a worryingly flat performance.

It was the midfielder Jefferson Lerma that perhaps best typified Bournemouth’s struggles, booting the ball away in frustration as Mike Dean blew the whistle for half-time. Eddie Howe’s side struggled to penetrate a well-organised Watford, largely running into blind alleys as the visitors kept them at arm’s length. Aside from a supercharged Harry Wilson free-kick, the Watford goalkeeper Ben Foster was untroubled.

Howe described this match as the start of a season-defining period, with their next three games against Norwich, Brighton and Aston Villa, but a sluggish Bournemouth failed to act on such a statement. Watford, by contrast, got to grips with the magnitude of the occasion and should have taken the lead long before Doucoure struck, with Gerard Deulofeu testing Irish goalkeeper Mark Travers from an acute angle before Adam Masina headed wide from the subsequent corner.

Watford, masterfully led by Deeney, always looked comfortable, though that did not prevent Pearson cajoling more from his players, notably when Ismaila Sarr, dazed by the low sun, failed to trap a routine crossfield ball. Those kinds of lapses were few and far between on a fine afternoon for Watford, who had successfully sapped the life out of Bournemouth with half an hour to play but the manner of the goals will have hurt.

Doucoure’s opener stemmed from an error, when Travers, making his first Premier League start of the season in the absence of the injured Aaron Ramsdale, panicked and lumped the ball straight to Sarr, who made strides down the right before picking out the Watford midfielder. Doucoure displayed poise before thumping the ball into the back of the net.

Deeney also opted for power, lashing in after brilliant work by Sarr, who twice fooled the Bournemouth defender Steve Cook before the ball fell to the Watford captain. Deeney made no mistake, smashing home before, in stoppage time, the substitute Pereryra put Bournemouth out of their misery. – Guardian