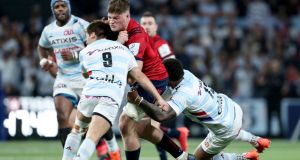 “Welcome to the pleasuredome,” said BT’s Nick Mullins as Munster stepped on to the carpet under the roof at La Defence Arena.

But by the time he bid us adieu the pleasure had been all Racing’s, Munster’s hopes of advancing in the competition now on a par with Meghan Markle’s chances of being appointed Royal Correspondent of the Daily Mail.

Having, most likely, offered up novenas all week for the health of JJ Hanrahan’s hamstring, the Munster faithful would have been thanking the heavens when he took to the carpet looking hale and hearty, Nick telling us that if he’d been ruled out, with Joey Carbery and Tyler Bleyendaal already on the injury list, Munster “would have been rummaging around in the sock drawer for a number 10”.

Rummage no more, JJ was in fine fettle, Racing left hamstrung by JJ’s three early penalties. But then Teddy Iribaren produced a back-to-fronty pass so exquisitely delicious, another Teddy (Thomas) converting in the corner, you’d have been left purring so loudly your dog might well have bitten the ankle off you.

“That was a 23-metre reverse pass,” said an agog Lawrence Dallaglio come half-time, him saluting the “Teddy Boys”. However by then Andrew Conway had intercepted and run the length of the pitch for a try, so there was a whole heap of life left in Munster yet.

They might have been an issue if the architects of La Defence Arena had put in more than a couple of cameras to allow the TMO spot offsides, forward passes and the like, instead of investing in the largest widescreen telly in history, and a light show to rival the one Bon Jovi will probably use on their next stadium tour.

Indeed, the TMO was possibly on the verge of asking for a loan of any iPhone footage taken by the spectators to help him out, but what’s done is done and what’s lost is lost and gone forever. And you couldn’t quibble a great deal any way, Iribaren’s pass alone should have been worth 35 points.

Munster gave their best, which is precisely what we can say about Kevin Kilbane’s Dancing on Ice effort.

There were times during his routine with his pro partner Brianne Delcourt that you couldn’t but be reminded of his Republic of Ireland career, when he was asked to switch from left wing to left-back: not a natural, looked like Bambi on ice at times, but gave it his absolute all.

At least back then he didn’t find himself judged by Torvill and Dean, although being put at the mercy of the ‘player ratings’ people, he’d have been prepared for the ordeal of listening to their verdicts.

And they were, largely, sympathetic, having watched footage of Kev’s early training sessions where he collapsed in a heap the moment his skates made contact with the ice.

But so committed was he to the effort he even allowed his body to be spray-tanned, before donning a sky blue glittery top and letting himself be carried on to the ice by four burly skaters, to the tune of ELO’s “Mr Blue Sky”, while carrying a glittery football which he then chucked at Brianne.

The routine then consisted of Kev and Brianne throwing the ball back and forth to each other, while he embedded his skates in the ice in the hope of not falling over, the climax coming when he headed the ball and still managed to remain upright. He looked even more chuffed than Torvill and Dean at the end of their Ravel’s Bolero routine in Sarajevo.

But not since the Brexit referendum have we been left so aghast by the voting, Ashley Banjo, John Barrowman and Jayne Torvill all giving Kev a 4.5, the bastards, Christopher Dean only marginally more generous, going for a 5.0.

“I feel like I’m watching the Tin Man from the Wizard of Oz,” said Barrowman, to which the audience, bless them, replied: “Boooooooo”.

Kev, as is his wont, just smiled, like he did all those time Dunphy questioned why he was even born, and vowed to do better.

The worst part of it all, though, was about to pop up on our screens: “VOTING IS NOT OPEN TO ROI VIEWERS.”

It’s at times like this that you rummage around in the sock drawer searching for a nuclear missile.