Doris and Deegan continue to underline their international credentials 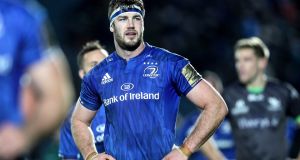 Caelan Doris was Leinster’s starting number eight and he will be again. The 21-year-old remains on course to make his Ireland debut against Scotland on February 1st but Max Deegan has forced a swerve in the conversation.

A slight pause for reflection following this clinical dismissal of Lyon.

“The number eight has been man of the match for three weeks in a row,” said Leo Cullen, laughing out loud at a predicament all of his own doing.

“Caelan was man of the match the week before against Munster away so, yeah, those guys are pushing each other on really well.”

Instead of fostering this rivalry, Ireland coach Andy Farrell might unleash a brand new double threat upon the Six Nations.

Cullen and Stuart Lancaster plan Leinster selections in blocks so Deegan was always going to get an opportunity instead of Doris – who has been the primary number eight this season – but Deegan’s stunning performance against Connacht last week appeared to swap the jerseys on the backs of these young backrows on return to Champions Cup action.

When Doris entered the game, Deegan completed another masterful display at blindside. That’s how it works – the former is a specialist, the latter a rare athlete with the gift of versatility.

How to maximise two outstanding young players at the same time now becomes a conundrum for Farrell, who strolled up to Ballsbridge from Sandymount to also witness the continued excellence of Rhys Ruddock and Josh van der Flier.

“It is visible for most people to see,” Cullen shrugged. “Those close calls, they know, and they know what’s coming around the corner as they [Doris and Deegan] were both in that Irish camp that assembled just before Christmas so they are getting a little bit closer to that.

“I’ve been in that position before as a younger player coming through and wanting to take that next step. They are doing everything in their power to try and do that.”

The wonder is whether Deegan’s burst of hard running has altered thinking about Doris being fast-tracked in the coming months.

“We say to them: ‘We pick on what we see’. Everybody gets to see what happens on the field and we obviously get to see what they do in training week on top of that. The way the coaches, and Stuart in particular, put players in situations they are exposed all the time.

Quite often what we see on the field is a reflection of what we tend to see in training anyway.

“Max had applied himself well in this block and made some really good progress. Caelan very similar as well.”

Deegan has an 18-month head start on Doris and the option of coming off the bench in any position but Doris made 19 tackles as a sub against Connacht. Deegan’s response was 42 carries for 142 metres spread evenly over the last two matches.

What’s increasingly apparent is this duo represents the future of Irish backrow play and probably in tandem.

1 David Clifford sends everyone back to their corners unbeaten
2 Six Nations: Ireland are contenders but England still the team to beat
3 James Durcan steals a draw for Mayo in Ballybofey
4 Mike Catt hopes to have Irish backs purring in Six Nations
5 Communication is key for new FAI president Gerry McAnaney
Real news has value SUBSCRIBE