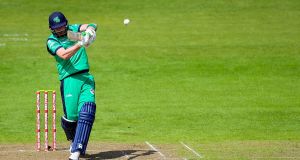 West Indies completed a 3-0 series whitewash over Ireland thanks to a five-wicket victory in the final One-Day International between the sides at the National Cricket Stadium in St George’s in Grenada on Sunday.

Ireland batted first for the third time in the series, although this time at the behest of their hosts, who won the toss and inserted Andrew Balbirnie’s side after a night of heavy rain showers on the Caribbean island.

Balbirnie would go on to backbone the innings with a knock of 71 but his departure put an end to hopes of Ireland putting together a meaningful total as they were bowled out for 203, with leg-spinner Hayden Walsh finishing with four wickets for 36 from his 10 overs.

Yet again Irish batsmen failed to push on after making starts, with Andy McBrine’s unbeaten 25 from 22 balls late on getting Ireland just over the 200 mark.

West Indies opener Evin Lewis looked like he had one eye on the upcoming T20 series between the sides, which gets underway in Grenada on Wednesday, taking the attack to the Ireland bowlers after they were set a target of 197 in 47 overs.

With showers sending the players scurrying from the pitch throughout the afternoon, the reply had a stop-start nature to it, but through it all Lewis kept his concentration and was joined in a 75-run partnership for the third wicket by Brandon King, who made 38 before edging McBrine behind to wicketkeeper Lorcan Tucker.

And having missed out in Barbados when he was left unbeaten on 99, Lewis made sure of his century before holing out for 102 when he holed out off Craig Young after a 63-run stand with Nicholas Pooran, who finished unbeaten on 43, hitting the winning boundary in the 37th over as the West Indies got home with over 10 overs to spare.