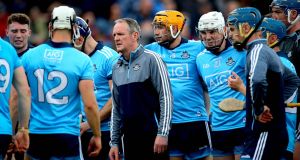 Mattie Kenny: “There’s no point getting concerned or upset about it, that’s the way it is and these are pre-season games and you’ve just got to take them for that.” Photograph: Ryan Byrne/Inpho

A fortnight out from a trip to Kilkenny in the Allianz Hurling League, you’d imagine Dublin manager Mattie Kenny would view a Walsh Cup semi-final against Galway this Sunday as a bonus, to fine-tune preparations.

Avoid a heavy defeat to Laois tomorrow evening at Parnell Park and Dublin will be guaranteed a last four tie against Kenny’s native county.

“I wouldn’t see it as a bonus because we have 14 or 15 guys playing Fitzgibbon Cup next weekend,” countered Kenny, referencing a college versus county conundrum that is unfolding all around the country.

The Electric Ireland Fitzgibbon Cup throws in on Sunday with six games, four of those involving Dublin teams including UCD and DCU.

In Dangan, NUI Galway will host UCC, diminishing the options of new Galway manager Shane O’Neill for what will be his first competitive game in charge.

Limerick and Cork, who meet on Saturday evening in the Co-Op Superstores Munster Hurling League final, are affected too by the fact that UL, LIT and holders UCC are all in Fitzgibbon action the next day.

In practical terms, it will mean that over half the 27 players that Kenny has handed game time to so far in the Walsh Cup, in games against Westmeath and Carlow, won’t be available if they qualify for Sunday’s semi-final.

“We had 24 of a panel [against Carlow] and with the Fitzgibbon starting next Sunday there’ll be a clash there,” said Kenny. “That would mean 14 or 15 of those guys would be gone next weekend but look, I’m sure it’s the same for every county.

“There’s no point getting concerned or upset about it, that’s the way it is and these are pre-season games and you’ve just got to take them for that, pre-season games, just try to get a bit of game time into lads. The results are not important at this time of the year.”

Kenny feels similarly about the visit of Laois tomorrow evening, insisting that the result isn’t overly important and that anyone suggesting a win will provide revenge for last summer’s shock championship is mistaken.

If Kenny is only perturbed by the situation and the clash of competitions, others are clearly more frustrated.

‘Madness’ was Donegal football manager Declan Bonner’s description of potentially being unable to field a team in the event that the Ulster champions reach the Dr McKenna Cup semi-finals on Sunday.

Along with the Fitzgibbon games, there will be eight Electric Ireland Sigerson Cup Round one matches taking place this weekend with seven of those on Sunday, clashing head on with the FBD Connacht League semi-finals and the penultimate stage of the pre-season competition in Ulster.

Those Dr McKenna Cup semi-final fixtures will be confirmed tonight after the three remaining group games are completed with Donegal needing to avoid defeat in Derry to make it through.

It remains to be seen how many players McGrath Cup finalists Limerick and Cork must do without on Saturday while even Dublin, with all their playing resources, may feel the pinch in the O’Byrne Cup semi-finals.

Dublin’s trip to Longford on Saturday will be their first competitive game since Dessie Farrell took over and even if they travel with a rookie squad, as in previous seasons, many may still be unavailable due to the involvement of DCU, UCD, TU Dublin and Trinity across the weekend.

This year’s Sigerson Cup campaign has been condensed down into just 17 days, concluding on January 29th, three days after the Allianz League starts.

That has naturally affected pre-season competitions though the bigger picture is that student inter-county players will be free to focus fully on the league.

“It’s straight knock-out so a lot of the teams will be out before the league starts,” stated Michael Hyland, chairman of the GAA’s higher education committee.

In the meantime, counties like Donegal will feel a pre-season pinch with Bonner estimating that around 13 of his players will be on third level duty this weekend.

“We might not even have a team to play,” said Bonner, raising the possibility of a walkover.

Before the decision to bring forward and condense the Sigerson Cup was made, former Dublin manager Jim Gavin consistently argued for the start of the Allianz Leagues to be pushed back.

“It’s the same issue that comes up every January and February about the Fitzgibbon, Sigerson and Trench Cups,” said Gavin last February. “I’m surprised we’re still playing National Football League games in the last week of January and the first week of February. There is no need for it. I think Sigerson and Fitzgibbon are very important competitions.”

The Fitzgibbon Cup also starts earlier this year but as in 2019 will take a month to run off, concluding with a February 12th final.