Vox cites ‘criminal mismanagement’ of pandemic, though vote is expected to fail 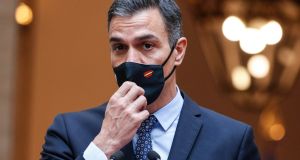 Spain’s leftist coalition government is facing a parliamentary no-confidence vote. Even though it is expected to fail, it highlights the deep divisions in the country’s politics.

The far-right Vox party has brought the motion against the government of Socialist Pedro Sánchez, which it accuses of “criminal mismanagement” of coronavirus, as well as undermining institutions and pandering to separatists. A debate on the motion begins on Wednesday and culminates with a vote on Thursday.

“No other government in the democratic era has gathered so many reasons … to face a no-confidence motion,” said Vox in a statement. “We have the worst government at the worst possible time.”

Mr Sánchez formed this administration in January after winning a general election but falling short of a majority. His coalition with the leftist Unidas Podemos relies on the parliamentary support of other, smaller regional parties.

This is the fifth no-confidence motion in Spain’s modern era. According to the constitution, the politician who presents it, in this case Vox leader Santiago Abascal, immediately becomes prime minister if the vote succeeds. Mr Sánchez himself took office in 2018 using this mechanism against the conservative Popular Party (PP).

With 52 representatives, Vox is the third-largest force in the 350-seat Congress, but even with the support of other parties on the right it would fail to secure the absolute majority needed to oust Mr Sánchez. No other parties have committed themselves to supporting the motion, with many seeing it as a 48-hour distraction from more pressing issues and a political stunt by Mr Abascal.

Inés Arrimadas, leader of the centre-right Ciudadanos party, said that “whoever presents a no-confidence motion in the middle of the second wave [of coronavirus] is irresponsible and has a problem with their morals”.

However, the position of the conservative PP, which is the biggest opposition party, is less clear. Although its leader, Pablo Casado, initially appeared to dismiss Vox’s initiative, he has avoided saying whether his party would vote in favour of the motion or abstain.

Mr Casado has taken a hard line against the government, particularly during the pandemic. On many issues, the PP’s position has closely resembled that of Vox, for example its constant claim that the government’s reliance on Catalan and Basque nationalists makes it illegitimate.

Like Vox, Mr Casado has also warned that the coalition is leading the country towards Venezuelan-style chaos, stating that “they threaten to take up the international Bolivarian agenda which favours narco-dictatorships”.

However, Mr Casado’s radicalism has coincided with a string of electoral losses for the PP and there is pressure within the party for him to distance himself from Vox and move towards the centre ground.

El País newspaper suggested the no-confidence motion, which promises to see a fierce debate, will therefore present a greater test for the PP leader than for the government.

“This motion offers a perfect stage on which Casado can free himself of prejudice and launch a resounding critique of the government – whose obvious mistakes and contradictions give him plenty of ammunition – without falling into the kind of histrionics that only legitimise Vox’s own rhetoric,” it said in an editorial.