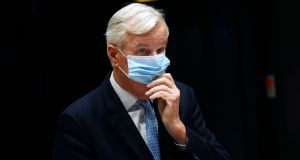 EU chief Brexit negotiator Michel Barnier: ‘We are determined reach a fair deal with the UK. We will do everything we can, but not at any price.’ Photograph: Francisco Seco/Pool/AFP via Getty

Negotiations between the European Union and Britain are on a knife edge after Brussels declared it was up to London to compromise, and that a deal would not be made at any cost.

EU leaders on Thursday unanimously agreed to step up preparations for “all outcomes, including that of no agreement” as a deadline set by Britain passed with no deal yet in sight.

Chief negotiator Michel Barnier said he was ready for “intensive” discussions with his British counterparts in the coming weeks and that the EU side would never walk away from the talks.

“We are determined reach a fair deal with the UK. We will do everything we can, but not at any price,” Mr Barnier told journalists. “Our positions have been crystal clear from day one of this negotiation, if you want access to our market of 450 million people, there must be a level playing field.”

The member state leaders met in Brussels to take stock of negotiations with just weeks remaining to clinch a deal in time for it to be in place by December 31st, and avoid the legal underpinnings of relations with Britain dissolving abruptly overnight.

Ireland has joined a group of coastal states to lobby against any compromise that would give away too much on the contested issue of fishing rights, with France leading the charge.

“Fisheries loomed large,” Taoiseach Micheál Martin said of the meeting. “Overall I think there was very strong unity of purpose”.

The national leaders agreed to “continue negotiations” and called “on the UK to make the necessary moves to make an agreement possible” in a text of joint conclusions.

This fell short of British hopes that the leaders would agree to intensify talks or signal a compromise, and Britain’s chief negotiator David Frost declared he was “disappointed” at the text.

“Also surprised by suggestion that to get an agreement all future moves must come from UK. It’s an unusual approach to conducting a negotiation,” Mr Frost wrote on social media.

Prime minister Boris Johnson has threatened to pull Britain out of the talks if he feels progress has stalled, and is due to declare his response on Friday.