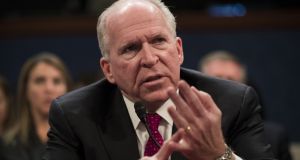 Former director of the CIA John Brennan: ‘Joe Biden has all the things that Donald Trump lacks in a positive sense and more.’ Photograph: Drew Angerer/Getty

In the opening of his new book Undaunted, John Brennan recounts his first encounter with Donald Trump. The US president had won the election on November 8th, 2016, and Brennan as director of the CIA was part of a small group of intelligence officials, including outgoing director of national intelligence James Clapper and FBI chief James Comey, sent to Trump Tower in New York to brief the incoming president.

Brennan, an Irish-American who had grown up in New Jersey, was of course familiar with the high-profile New Yorker. “I had heard and read many stories of Trump’s reliance on intimidation, untruths, ruthless litigation and bankruptcy laws . . . to fuel his eponymous business ventures and to achieve some measures of financial wealth,” he writes.

Entering the room, with Trump surrounded by his team including incoming CIA chief Mike Pompeo, who would later become secretary of state, Brennan – like many when they meet Trump in person – was surprised by the president-elect’s physical presence. “He was larger than I anticipated, both in height and width, even when he removed his expensive black overcoat.”

Trump, though attentive throughout, was uninterested in finding out about Russian interference in the election, he said, instead positing his own theories about election interference. Descending the elevator of Trump Tower, Brennan recalls: “I had become even more convinced that my long-held assessment of Trump’s narcissism, lack of principles, and unfitness for the country’s highest office was accurate.”

Almost four years on, as Trump seeks a second term in the White House, have his initial impressions changed?

“No,” says Brennan emphatically in an interview with The Irish Times. “I was hoping he would grow into the position but I think over the past four years he has demonstrated time and again that he still sees the world through a very personal prism. I saw Donald Trump as being ill-prepared and even being ill-suited from an experience and temperament standpoint. I think he has continued to disregard the best interests of the American people.”

Brennan has been one of the most vocal critics of Trump for the duration of his presidency. Through his regular appearances on TV news channels and via his Twitter feed, he has lambasted the president’s behaviour, in one memorable comment describing Trump’s apparent siding with Russia over his own intelligence services in a press conference after his meeting with Vladimir Putin in Helsinki as “treasonous”.

The outspoken stance by a man who led the CIA has divided opinion. For many he is one of the few senior figures in public life with the integrity to stand up and call out what he sees; to others, his forthrightness is ill-advised in a former intelligence chief who is supposed to be above politics, and it only serves to fuel accusations from the right that the US intelligence officers are a “deep state” bunch of never-Trumpers.

Brennan is not afraid to speak his mind, but he insists that his position is nothing to do with his politics, noting that he has served under six presidents, most recently Barack Obama (Brennan is present in the famous photograph taken in the situation room capturing Obama, Hillary Clinton and others observing the Osama Bin Laden raid in 2011).

“The reason I’ve spoken so vociferously against Donald Trump is not because I disagree with his policies abroad – and I certainly do – it’s his dishonesty, his lack of character, his deceit, his wilful misleading of the American people and the world community,” he says in his quiet, serious voice.

In particular, Brennan believes that the president exhibits characteristics typical of an autocrat.

“His rhetoric is very much of a demagogue where he has tried to denigrate the institutions of government because he feels threatened by them, he denigrates the role of the courts and the judicial system when they rule against him, and he has continued to undermine the notion of the importance of a free press. These are all traits of an authoritarian and he’s taken a page out of the authoritarian’s playbook – that you control the intelligence and security services, you co-opt the judiciary system, you try to neutralise the free and independent media. You use your own propaganda instruments, which he has done very effectively with Fox News.”

He fears that Russia is once again working to influence America’s election, and while he has praise for officials like FBI director Christopher Wray for trying to protect the election from malign cyber-attacks, he believes Trump is wilfully ignoring the threat of Russian interference.

“I do believe that Trump recognises but will not admit that the Russians helped him get elected in 2016, which is why I think that he’s not going to do anything to deter or dissuade the Russians from interfering in this election,” he says.

“Trump is still counting on the Russians and Vladimir Putin, to do what they can in the influence operations and social media, to shape the views and attitudes of American voters.”

While he praises Wray, he has publicly denounced the current director of national intelligence John Ratcliffe as “exceptionally partisan”. Ratcliffe recently declassified sensitive documents related to Russian interference in the 2016 election, including redacted handwritten notes by Brennan, which he said he had done “at the direction of Donald Trump”.

Similarly, Brennan takes issue with the Mueller investigation steered by former FBI director Robert Mueller. Brennan believes that the Trump campaign did collude with Russia, noting that Mueller was “not able to unearth the evidence that he felt necessary to bring charges of conspiracy to a court”.

“He didn’t interview Donald Trump, he didn’t do a lot of things that would have led to better insight into what transpired,” he says.

With the US election just under two weeks away, Brennan is concerned about Trump’s willingness to accept the outcome. “According to the constitution, his powers evaporate on inauguration day. I do believe that he is going to do everything possible, first to steal the election. When he realises that he can’t do that, to try to protect himself legally,” he says, saying it would not surprise him if Trump pardons himself or steps down to allow Mike Pence to pardon him, though this would only protect him from federal, rather than state crimes.

“Every president in United States history has turned over those reins of power and has not fought it. This is just so typical of Donald Trump. He doesn’t believe that the rules apply to him, that the laws apply to him.”

Although Brennan’s book is one of a number published in what could be the final months of Trump’s presidency, its scope is broader than others, offering a ringside view into a life at the heart of the US intelligence apparatus.

It describes Brennan’s journey to the top of the CIA, beginning with his childhood in an Irish-American neighbourhood; his decision to attend Fordham University in New York; and how a visit to a cousin posted in Jakarta in his sophomore year sparked a wanderlust and interest in geopolitics that eventually led him to a career in the CIA.

His Irish roots also feature heavily, as he evocatively recounts an Irish-American upbringing with which millions of Americans can identify. His father emigrated from Roscommon in 1948, and the book features fascinating personal photographs, such as a picture of his grandparents Owen (Odie) and Ann Brennan, at their farmhouse in Mount Plunkett, Co Roscommon.

Also of interest are the passages where Brennan describes his relationship with Joe Biden, now the Democratic candidate for president.

As vice-president in the Obama administration, Biden had many dealings with Brennan. Their relationship was “very close”, Brennan writes. He discloses that Biden phoned him personally when former White House press secretary Sarah Huckabee Sanders announced from the White House briefing room in 2018 that Trump was revoking Brennan’s security clearance.

I ask him if Biden has what it takes to be president.

“He will reassure the world that America is back,” he says. “A lot of damage has been done by Donald Trump but Joe Biden has a very realistic view of the challenges he faces.” Biden shares, along with Obama, a “deep belief in American exceptionalism”, he says, but Biden believes that with this power comes a responsibility for global peace and security.

As for who he will vote for in November, he declines to answer, recalling with a smile that he once disclosed that he had written in the name of a communist candidate in an election– an admission that he made in his interview with the CIA and which his detractors on the right continue to use against him.

But he is willing to give a prediction for what will happen next month. “I do believe that Trump is going to go down in defeat and it’s going to be a rather clear defeat,” he says. “I believe Donald Trump is very much an aberration.”