Southern African nation had asked for support against uprising that has killed 2,000 people 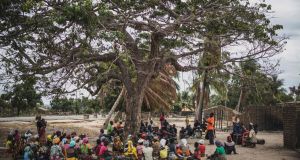 Residents at the village of Aldeia da Paz outside Macomia, Mozambique, after an attack by Islamist militants in 2019. Photograph: Marco Longari/AFP via Getty Images

The European Union has agreed to assist Mozambique to tackle a violent Islamist insurgency in its northernmost province, which has already claimed the lives of about 2,000 people.

In September the southern African nation wrote to the EU asking for military training for its armed forces and medical and humanitarian support, as it has struggled to contain the uprising in resource-rich Cabo Delgado which has escalated dramatically this year.

The United Nations believes about 300,000 people in the province have been internally displaced by fighting that has seen important towns repeatedly occupied by the militant group known locally as al-Shabaab (“the youth”).

Researchers say al-Shabaab’s fighting force is predominantly made up of disaffected young men from the province, but the insurgents also claim to be affiliated to the Islamic State terror group.

An EU spokeswoman in Mozambique confirmed the bloc issued a reply to President Filipe Nyusi’s administration on October 9th, stating it could provide support under strict conditions.

“The EU will encourage and support developing an integrated approach to dealing with the armed violence in Cabo Delgado, taking into account the humanitarian, developmental and security aspects, in compliance with the international human rights standards and the rule of law,” the spokeswoman told The Irish Times in an email.

Human rights bodies have accused Mozambican troops of murdering civilians and captured insurgents during the government’s campaign against the militants, saying they have video evidence of the alleged atrocities.

However, the government has denied the accusations and maintains the militants are known to impersonate its soldiers.

The EU spokeswoman said that Mozambique and the EU has opened a policy dialogue on the issues plaguing Cabo Delgado, and this will provide both sides with opportunities “to discuss the concrete options for assistance”.

But Zenaida Machado, a Mozambique researcher with Human Rights Watch, has said that the details that emerge from these discussions must be made public in the interests of transparency.

On the NGO’s website she wrote that before providing any support, the EU should get “verifiable commitments from the Mozambican security forces to respect human rights in its operations and hold violators accountable”.

If the EU and Mozambique can agree on the support to be provided it will be the first official international intervention in the insurgency since it began in October 2017.

The region’s main intergovernmental body, the South African Development Community (SADC), has declined to get involved so far despite the conflict’s regional security implications.

To date Mozambique has relied on help from Russian military security contractor the Wagner Group, and more recently the Dyck Advisory Group, a South African security company, to keep the insurgents at bay.

Earlier this month Liesl Louw, an analyst with South Africa’s Institute of Security Studies, told The Irish Times there is a danger that direct EU support to Mozambique could create regional tensions, given southern Africa’s colonial past.

However, the EU says it is following the Cabo Delgado situation “in close co-ordination with its regional and multilateral partners, including SADC”.