Sudan to be removed from US terror blacklist after paying $335m 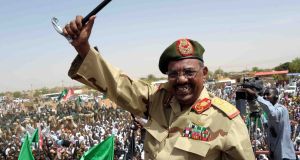 Ousted Sudanese president Omar al-Bashir in April 2012. He was accused of allowing militant groups to operate from his state. Photograph: Ebrahim Hamid/AFP via Getty Images

Sudan is set to be removed from the US terrorism blacklist, after its new government paid $335 million towards victims of two al-Qaeda terrorist attacks carried out in 1998.

“GREAT news!” US president Donald Trump tweeted on Monday. “At long last, JUSTICE for the American people and BIG step for Sudan!”

“As we’re about to get rid of the heaviest legacy of Sudan’s previous, defunct regime, I should reiterate that we are peace-loving people and have never supported terrorism,” Hamdok said.

The latest announcement comes as the US encourages Sudan to recognise Israel, after the United Arab Emirates and Bahrain agreed to normalise relations with Israel last month following US-brokered deals.

Sudan was added to the terrorism blacklist in 1993, when long-ruling dictator Omar al-Bashir was accused of allowing militant groups to operate from his state.

Activists in Sudan have long argued that the country’s isolation only hurt civilians, rather than the regime and political elites, who individually were capable of finding ways around it. Economic sanctions were eased by the US in 2017. They had prevented any transactions using dollars or US products inside Sudan, crippling the economy and affecting everything from healthcare to industry.

In more recent years, inflation has rocketed, leading to unrest over the unaffordable cost of living, on top of Bashir’s own corruption and mismanagement.

Being removed from the terrorism blacklist – upon which the only remaining countries are now North Korea, Iran and Syria – means Sudan can access foreign financing and debt relief.

Cameron Hudson, former chief of staff for the US special envoy to Sudan, called this the “best deal possible for the country”.

Sudan’s central bank governor confirmed on Tuesday that the money had been transferred. It relates to attacks in which more than 200 people died after the US embassies in Kenya and Tanzania were targeted by al-Qaeda-affiliated suicide bombers driving trucks filled with explosives. The vast majority of those killed and wounded were Africans, though Americans are expected to benefit the most.

Earlier this year, Sudan also agreed to compensate the families of 17 US sailors who were killed after al-Qaeda bombed their ship at a Yemeni port in 2000.

Sudan was accused of sheltering Osama bin Laden in the run-up to the attacks.

Mr Bashir – who had been in power since 1989 – was ousted in a military coup in April 2019, following months of civilian protests. A transitional military-civilian government is now ruling the country, and elections are expected in 2022.

This week, International Criminal Court prosecutor Fatou Bensouda visited Khartoum to discuss whether Mr Bashir will be extradited to face charges of crimes against humanity and genocide in the western region of Darfur. Hamdok called Ms Bensouda’s visit “a testimony of the total reform” of Sudan.

About 300,000 people were killed and 2.5 million displaced in Darfur from 2003 on, according to the United Nations.