Werner Lustig is optimistic there is money to be made from 2,000-year-old Roman insult 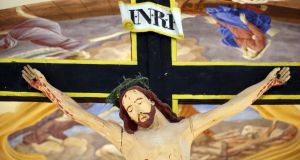 At the last minute, EU trademark authorities rejected his registration for INRI use on jewellery, which would have given him the monopoly on the use of INRI on crosses. Photograph: Godong/Universal Images Group via Getty

A German businessman has trademarked the letters INRI, used by Christianity on crucifixes for over 2,000 years.

The letters were nailed to the cross by Roman soldiers as one final bitter joke: Iesus Nazarenus Rex Iudaeorum, Jesus of Nazareth, King of the Jews.

As a practising Catholic, property investor Werner Lustig said he was surprised the church had not yet secured this part of the “Jesus legacy”.

First on the market from him will be T-shirts, with the INRI acronym and an image of Jesus not dissimilar to that on the Shroud of Turin.

“I hope these T-shirts prompt people to reflect, the recognition factor is huge, and perhaps one person or another will discover their love of religion once more,” said Mr Lustig, a 58-year-old former altar boy, to Der Spiegel magazine.

Theoretically Mr Lustig could charge anyone who produces – or displays in public – a product containing his trademark initials, but only in four fixed categories.

At the last minute, EU trademark authorities rejected his registration for INRI use on jewellery, which would have given him the monopoly on the use of INRI on crosses. Even with the trademark office limitations, Mr Lustig is optimistic that there is money to be made with a 2,000-year-old Roman insult.

“I just want to bring my products to market,” he said. “If there is overlap we will be able to agree amicably. I’m sure we will find a gentleman’s agreement.”

So far he hasn’t heard from the Holy See in Rome, though he consulted two local priests, both of whom were enthusiastic about the evangelising possibilities of his products.

He isn’t going to stop with T-shirts, either. His EU trademark extends beyond textiles to cosmetics, leather goods and drinks.