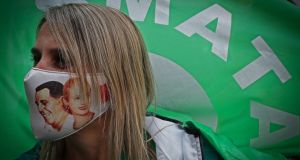 A demonstrator wearing a face mask with images of Argentine late president Juan Domingo Peron and his wife Eva Duarte. Argentina now has more than a millions cases of coronavirus: Photograph: Alejandro Pagni/AFP

Argentina health officials say the nation has officially surpassed 1 million coronavirus cases, becoming the fifth country to do so.

Across Latin America, three other nations are expected to reach the 1 million case milestone in the coming weeks – Colombia, Mexico and Peru.

The grim mark comes as Latin America continues to register some of the world’s highest daily case counts.

And though some nations have seen important declines, overall there has been little relief, with cases dropping in one municipality only to escalate in another.

The trajectory is showing that the pandemic is likely to leave no corner of Latin America unscathed.

“The second wave is arriving without ever having finished the first,” said Dr Luis Jorge Hernandez, a public health professor at the University of the Andes in Colombia.

Argentina has seen cases spiral despite instituting one of the world’s longest lockdowns.

Colombia’s major cities have seen a dip, but smaller areas like the department of Caldas in the coffee region are only now reaching a peak.

Peru’s overall numbers have dropped, but officials recently reported 12 regions are spiking back up. Mexico, likewise, has seen a rise in a quarter of all states over the last week.

The result is that rather than a second virus wave like that being seen in Europe, epidemiologists anticipate a more sustained, plateau-like trend.

“Our countries are still getting out of the first wave,” said Dr Marcos Espinal, director of the Pan American Health Organisation’s Department of Communicable Diseases.

“A great part of the population remains exposed and community transmission continues.”

The virus’ cruel path through Latin America is a consequence of weak public health systems, social factors like poverty and poor government decisions early on that resulted in flawed or limited testing and little contact tracing.

Today the region is home to half the 10 countries with the highest total cases around the globe.

Argentina initially registered low virus case numbers but now has one of the highest rates of new daily infections per capita, according to Our World in Data, a non-profit online scientific publication based at the University of Oxford.

It is on par with several European countries that are experiencing a resurgence of the virus.

Dr Adolfo Rubinstein, a former Argentine health minister, said the nation depended too heavily on lockdowns as its primary means of controlling the virus, failing to purchase enough tests in the initial months of the pandemic.

Where the virus is appearing is also shifting. Initially, up to 90 per cent of the confirmed cases were in metropolitan Buenos Aires. Today, 65 per cent of Argentina’s cases are in its provinces, authorities said.

The high percentage of tests coming back positive in Argentina suggests the country is still likely missing vast numbers of infections.

The UK recorded 21,330 new cases of Covid-19 on Tuesday, its highest daily number of coronavirus cases.

The Government also said a further 241 people had died within 28 days of testing positive for Covid-19, as of Tuesday. This brings the UK total to 43,967.

It is the highest daily figure reported since 258 deaths were reported on June 5th but there is often a delay in the reporting of deaths over a weekend.

Separate figures published by the UK’s statistics agencies show there have now been 59,000 deaths registered in the UK where Covid-19 was mentioned on the death certificate.

Several Spanish regions toughened their coronavirus restrictions on Monday, seeking to curb a second wave of contagion that looks set to drive the country with western Europe’s highest case load above a million infections this week.

Authorities in the northern region of Castile and Leon announced they would seal off the city of Burgos and nearby Aranda de Duero to all but essential travel from Tuesday night after infection rates in the area surpassed 500 cases per 100,000 people.

“We are in circumstances similar to those of March or April,” Burgos mayor Daniel de la Rosa told state broadcaster TVE, recalling the beginning of the pandemic, when many Spaniards were confined to their homes to stop the spread.

Aragon, which was at the centre of several outbreaks linked to migrant agricultural workers over summer, introduced capacity limits at bars and restaurants and banned the sale of alcohol in shops between 10pm and 8am.

Regional health chief Sira Repolles said she was “very close” to imposing restrictions on movement in the regional capital Zaragoza.

And Catalonia, which last week ordered a 15-day shutdown of bars and restaurants, told 24-hour businesses they must shut at 10pm and cannot reopen until 7am.

Spain’s decentralised political system leaves the handling of the pandemic largely up to the regions, although the central government can intervene, as it did on October 9th by declaring a state of emergency in Madrid to reimpose a partial lockdown on several million people in and around the capital.

Despite the increasingly severe clampdown, Spain has added nearly 38,000 cases since Friday, bringing the nationwide total up to 974,449. The death toll jumped by 217 to 33,992.

“It’s likely that in winter if we don’t take great care with precautionary measures the infection rate will increase again,” he told a news conference.

Neighbouring France has nearly 900,000 cases and could also surpass 1 million this week.

Belgium shut its bars and restaurants and imposed a midnight curfew for citizens on Monday as the country faced a “tsunami” of infections the government said was worse than anything seen in the spring.

Under the new restrictions, alcohol may not be sold after 8pm, citizens are only allowed to have one close contact outside their own household, people must work from home where possible, and bars, restaurants and cafes will be shut for one month.

Home visits are allowed, but only for four chosen people per household, who must keep 1.5 metres apart and wear face masks.

The government says the rules must be adhered to to avoid even stricter measures, like those seen in spring, when citizens were only allowed to leave their homes for essential reasons.

Infections in Belgium have been running at 757 per 100,000 people on average over the last few weeks, the highest national rate in the European Union after the Czech Republic, in a country which has already experienced one of the highest death rates in the world.

Pakistan has witnessed a 140 per cent increase in fatalities from Covid-19 in recent weeks due to widespread violations of social distancing rules, a cabinet minister has said.

Asad Umar, the planning and development minister who oversees Pakistan’s response to coronavirus, warned on Twitter “We will lose both lives and livelihoods” if people did not adhere to social distancing rules.

His comments on Tuesday came shortly after the military-backed Command and Operations Centre reported 14 deaths and 625 new cases in the past 24 hours.

Prime minister Imran Khan had warned on Monday that Pakistan’s big cities could face a second wave of Covid-19 in the coming weeks because of increasing pollution in winter.