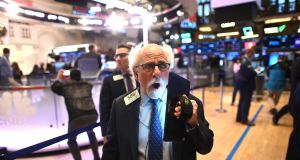 Global markets suffered under growing fears about the impact of coronavirus. One dealer in Dublin said: “There’s a lot of red on the screen.”

In his Caveat column, Mark Paul says Ireland’s hospitality sector is hoping it isn’t afflicted by American fears over the virus.

Businessman Denis O’Brien’s Digicel telecoms group is in talks to form a network-sharing partnership with a rival in one of its markets in order to reboot cash levels as it deals with ongoing interest payments on its almost $7 billion debt.

Facebook has been forced to suspend the use of its election day reminders across the EU by the Data Protection Commission until it has satisfied the regulator about about how personal data is collected, writes Peter Hamilton.

On the housing front, John FitzGerald explains why there is little chance we can build enough homes to meet the election promises.

New figures out this morning show that first time buyers remained the driving force for new mortgage approvals in January when a total of €744 million worth of home loans were given the green light.

Cash is no longer king, and the shift from physical money to its virtual equivalent has reached a tipping point, a survey published this on Friday morning suggests. The news comes a day after AIB said it agreed to sell its network of more than 500 non-branch ATMs in the Republic to Brink’s.

Insurer FBD Holdings chief executive Fiona Muldoon has rejected claims that a profit spike at the company last year is being driven by an industry ripping off customers. Pretax profit rose to €112.5 million last year from €50.1 million for 2018’. Her remuneration rose by 6 per cent to €993,000.

In this week’s Agenda, Joe Brennan assesses the state of Ireland’s banks and suggests the Irish lenders will now turn to financial markets to remove non-performing loans from their balance sheets.

After 20 years in banking, Pat Farrell is putting his lobbying skills to use representing institutional property investors. In the interview of the week he says: “The only time apartments were viable was in . . . Ballsbridge, Killiney and Dalkey”.

Finally, in this week’s World of Work, Olive Keogh explains how businesses can tackle the transport problems of their staff by going green.