Data protection concerns over election day reminder yet to be addressed, DPC says 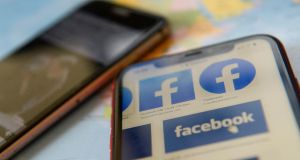 The US-based social media giant has been rolling out an ‘I voted’ button during elections, which allows users flag whether or not they have voted. Photograph: Johanna Geron/Reuters

Facebook has been forced to suspend the use of its election day reminders across the EU by the Data Protection Commission until it has satisfied the regulator about about how personal data is collected.

The US-based social media giant has been rolling out an “I voted” button during elections, which allows users flag whether or not they have voted.

But the Data Protection Commission (DPC), the lead supervisory authority for Facebook across the European Union, raised concerns over the feature in advance of the recent Irish election.

The Irish Times understands the concerns centred around how Facebook was using the data, and whether it meant that users’ personal data was being collected with a view to being targeted for advertising.

The issue was originally raised by the Italian data protection authority and the Irish regulator started to engage with Facebook in advance of our general election earlier this month.

The DPC hasn’t said that Facebook was or wasn’t using the data for advertising purposes, but simply that it is yet to investigate the feature.

In a statement, the DPC said the feature “raised a number of data protection concerns particularly around transparency to users about how personal data is collected when interacting with the feature and subsequently used by Facebook”.

As it was not possible to implement any remedial actions before the election, Facebook decided not to run the feature, the statement said. It added that the company won’t use the election day reminder feature during any elections in the EU before it responds to the DPC addressing the concerns it has raised.

“We believe that the Election Day reminder is a positive feature which reminds people to vote and helps them find their polling place,” a Facebook spokeswoman said.

“We are committed to processing people’s information lawfully, fairly, and in a transparent manner. However, following concerns raised by the Irish Data Protection Commission around whether we give users enough information about how the feature works, we have paused this feature in the EU for the time being. We will continue working with the DPC to address their concerns,” she added.