Ireland’s economy is humming but uncertainty over government a worry 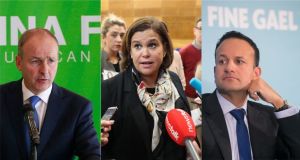 It is puzzling that 11 days after an election, we are no closer to getting a new government.

The good news just keeps coming. Yesterday the Central Statistics Office told us that 2.36 million people had jobs in the Republic in the closing three months of last year, which the number crunchers confirmed was a record. At the same time, just 110,000 or so people were out of work, a level of unemployment not seen since before the last recession struck in 2008.

Last week an OECD report painted a Nirvana-like picture of a nation at close to full employment, where real wages were above the average for the think tank’s 137members and which boasted a progressive tax system that narrowed the gap between the highly-paid and those not so well off.

The OECD believes that gross domestic product, that is the wealth the Republic creates, will grow 3.6 per cent this year. The Central Bank of Ireland, meanwhile, calculates that it will increase by 4.8 per cent to €351 billion in 2019.

They may not agree about the speed at which the economy is travelling, but both believe that the direction is upwards. In fact, all three reports show the same trends. The Central Bank’s quarterly bulletin points out that exports of pharmaceuticals, made by the likes of Bristol Myers Squibb and Pfizer, along with hi-tech products and services, are driving growth.

The OECD also attributes our economy’s rude health to that mix of medicine and technology, while the CSO’s figures show that the hi-tech industry led the way on jobs growth. Last year, that sector hired an extra 12,000 staff, bringing the total on its payroll to 127,100.

Multinationals dominate pharma and technology. Thanks to new products, both industries, already export-focused, are growing strongly and tend to be more productive than local Irish businesses.

So a lot of our economic momentum is down to them. That momentum should slow next year, both the OECD and Central Bank say, but simply because there is little room left for growth as the economy is going at close to full tilt. So what could possibly go wrong?

For one, our openness to trade, one of the factors that makes the Republic a good location for exporters, leaves us vulnerable to international tensions. There is a lot of that about. Last month, US president Donald Trump indicated that he had the EU in his sights, specifically that he could subject European-made cars to tariffs. Kerrygold butter and other Irish products have already been caught in the tariffs crossfire.

A trade war, or even increased friction between the two, could hit the Republic, as many of those pharma and hi-tech exports go to the US.

In the longer term, OECD efforts to reform global tax rules could blunt some of the Republic’s edge over rival countries when it comes to luring multi-national investment. Last week, the organisation’s economist, Laurence Boone, said members, including this State, could thrash out proposals on this front over the next 12 months.

Meanwhile, the coronavirus, now dubbed Covid 19, which has killed more than 1,700 people since late last year, poses a more immediate threat. Food giant Kerry Group said yesterday that the outbreak could knock 30 per cent off its sales in China over the first three months of this year.

Nevertheless, these problems may only be a stiff breeze compared to the potential headwind that is Brexit. This week’s warning from UK chief negotiator David Frost that his government would give up access to the EU single market, rather than accept Brussels’ level playing field rules, once again raises the prospect of the UK going over the cliff edge as it leaves the bloc.

Even with a trade deal, the Central Bank estimates that the Republic would create 55,000 fewer jobs than if the UK had stayed in the EU. If no deal is done this year and World Trade Organisation rules govern trade with our nearest neighbour, the bank’s economists believe Irish output could fall 5 per cent in the longer term.

In light of all this, it is puzzling that 11 days after an election, we are no closer to getting a new government. Irish voters long ago ditched single-party administrations. No one has won an overall majority since Fianna Fail in 1977.

All 160 TDs know this. They also understand that voters expect them to form a new government following a general election. So talk about numbers not adding up, last resorts, sustainable governments and so on is just posturing.

Some of that is inevitable ahead of any political negotiation. However, with the Dáil due to reconvene this week against the background of looming threats to our prosperity - and so our ability to tackle health and housing crises - it now looks like individual parties putting their interests ahead of anything else.

If that is the case, it means the biggest threat to the Republic’s 2.36 million workers’ jobs is not Brexit or coronavirus, but the TDs they have elected to protect and serve their interests.