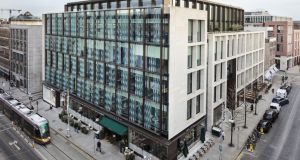 Green Reit has recruited top legal firm Arthur Cox to assist in its efforts to win planning permission for Dublin city centre’s first new cinema in many years. The legal firm has told An Bord Pleanála that an objection to the cinema was submitted by an entity that did not exist.

Last November, Dublin City Council granted planning permission to Green Reit for a two-screen cinema in the basement area of One Molesworth Street, which also houses the Ivy restaurant.

However, the plan was put on hold after DET Ltd, with a Dún Laoghaire address, appealed the decision to An Bord Pleanála last December. Appeals generally take four months and Green Reit wants the appeal lodged by DET Ltd to be thrown out.

Green Reit has told the appeals board that DET Ltd “doesn’t exist” and that the appeal “is vexatious, frivolous and without foundation”.

Consultants for Green Reit, John Spain & Associates, told the board that the appeal “has been made with the sole intention of frustrating and delaying the current development proposal”.

Green Reit has employed Arthur Cox to support its case. The solicitors told the appeals board that DET Ltd did not exist when it lodged its objection against the cinema plan with the council last year, and still did not exist at the time of lodging the appeal.

Arthur Cox has called on the appeals board to dismiss the appeal as it is not possible for DET Ltd to confirm its address as the company doesn’t exist.

The appeal before An Bord Pleanála remains “live” in spite of the city council writing to the appeals board on December 3rd advising that no appeal comments should be accepted by Ms S O’Neill of DET Ltd as the objection against the cinema plan was declared invalid by the council.

The council wrote to the Dún Laoghaire address provided by DET Ltd last November telling the company that following a review of the submission and legal advice from the council’s legal department, the submission was invalid.

The council also included a refund of €20 to DET Ltd for the objection made. It then removed the DET Ltd submission from its file.

In the submission on behalf of Green Reit, John Spain & Associates also claim that the appeal “is without any substance or foundation”.

A decision is due on the appeal in April.