Not feeling the economic recovery? Maybe you have ‘growth envy’ 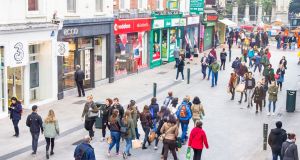 Sentiment also rose in the US and elsewhere in the EU, but KBC said Irish attitudes may be suffering from a “feelbad” factor because the recovery has “under-delivered” for many. Photograph: iStock

The mood of Irish consumers did not lift last month as it did in several other countries because they may be experiencing “growth envy” spurred by glowing reports on the Irish economy that jar with constraints on disposable income, according to the latest KBC consumer sentiment index.

The index fell marginally last month, despite an expected relaxation in spending attitudes due to an easing of fears of an immediate hard Brexit.

Sentiment also rose in the US and elsewhere in the EU, but the bank said Irish attitudes may be suffering from a “feelbad” factor because the recovery has “under-delivered” for many.

“Consumers in the US and across the EU as a whole now see their glass as more than half full. In spite of some recent improvement, Irish consumers remain concerned about problems whether these relate to their current reality or looming risks. This translates into an Irish consumer sentiment reading that sees the glass as (more than) half empty.”

KBC noted that the Irish index score is running at below its long-term average, while it has trended lower in the last year-and-a-half, even though employment has kept rising.

“We continue to take the view that an element of ‘growth envy’ is weighing on consumer sentiment at present as glowing commentary on Irish economic conditions has not been seen to deliver correspondingly marked improvements in the circumstances the average Irish consumer,” said the bank.

KBC highlighted that average disposable income is still 2 per cent behind where it was in early 2008.

“The limited pace of recovery in average incomes and the marked shortfall relative to GDP likely informs a view that the Irish economic recovery has significantly underdelivered for many Irish consumers.”