Partnership would be a first for group which had $6.8bn debt at end of December 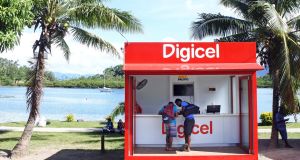 Customers shop at a Digicel store for mobile phones in Savusavu, Fiji

Businessman Denis O’Brien’s Digicel telecoms group is in talks to form a network-sharing partnership with a rival in one of its markets in order to reboot cash levels as it deals with ongoing interest payments on its almost $7 billion debt.

Company executives told bondholders on a call this week that the group’s liquidity levels remain “tight but manageable”, according to sources, even after it reported that its cash level slid to $126 million (€115 million) in December from $180 million three months’ earlier. It had stood at $214 million earlier in the year.

The executives signalled the network joint venture talks on the call, without identifying which of the 32 markets in which it operates across the Caribbean, Central America and Pacific islands is subject to the plan.

While Digicel is estimated to have raised more than $150 million from the sale of mobile towers in Jamaica, El Salvador and French West Indies in the past three years, a network-sharing accord would be a first for the group.

A spokesman for the company declined to comment on the contents of the bondholder call.

The telecoms group, set up by Mr O’Brien in Jamaica in 2001 after netting about €200 million for the sale of Esat Telecom to BT Group the previous year, reported to bondholders this week that its earnings before interest, tax, depreciation and amortisation (ebitda) rose by 4 per cent year-on-year to $251 million in the third quarter of Digicel’s financial year.

This was driven by more favourable currency movements in some of its main markets against the dollar, and ongoing data revenue growth, which has offset declining voice sales in its mobile division.

The improving earnings picture comes at a time when Digicel is weighing how to refinance $1.3 billion of bonds that mature in early 2021, which has become a growing issue for the company’s creditors and debt ratings agencies.

Ratings group Fitch warned last November that Digicel faces “imminent refinancing risk” and will likely have to restructure the 2021 bonds, which may in turn trigger a restructuring of a further $3.8 billion of debt that is due to mature between 2022 and 2024.

The group has repeatedly highlighted that it has “successful track record of refinancing debt maturities before they fall due, and it continues to evaluate options in this regard”.

Investors would expect Digicel to come up with a refinancing plan at least a year before the bonds mature, in April 2021.

Digicel’s net borrowings stood at $6.8 billion at the end of December, resulting in a net debt burden of 6.8 times ebitda, according to sources. That compared to a ratio of 7.3 times six months earlier.

The company has 14 million subscribers after spending more than $5 billion developing its networks over the past 19 years.

Mr O’Brien has also taken at least $1.9 billion of disclosed dividends out of the group between 2007 and 2015.

Noel Smyth seeks €8.5m for south Dublin site with planning for 200 apartments 06:00
Core Industrial seeks €170m from sale of Dublin logistics assets 06:00
New era for Kilkenny Group as Marian O’Gorman steps down after 22 years 05:45
The Naked Collective bags Oscar for its healthy drink 05:30
Everyday banking: Are we getting less but paying more? 05:25