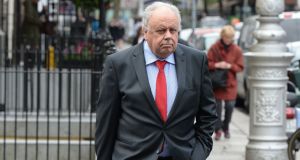 Former Department of Finance secretary general David Doyle (70), who was a central figure in State’s response to the banking crisis, has died.

“David Doyle had a long and distinguished career in the public service,” said Minister for Finance Paschal Donohoe in a statement. “I wish to extend my sympathy to his family and friends.”

A Co Meath native, Mr Doyle began his civil service in 1972 in the Department of Education in 1972, having spent five years working with fuel group Texaco in the private sector.

He went on to join the Department of Finance in 1975, spending much of his career in the public expenditure division. He also spent periods in the budget, economics and finance units of the department before being appointed as its top official in 2006, at a time when the Celtic Tiger economy was still roaring.

Mr Doyle would go on to retire in January 2010, 10 months before the Government was forced to seek an international bailout as the cost of rescuing the country’s banks following the property market’s implosion became too much to shoulder.

The former top official told the Oireachtas banking inquiry in 2015 that the Government’s snap guarantee of the banking system in September 2008, shortly after the collapse of US investment bank Lehman Brothers, was essential.

However, he used the appearance to criticise a litany of failure by public institutions ahead of the crash, including his own department, which, he said, “was wrong to rely on consensus forecasts for a soft landing” in the property market.