Two out of three Irish adults use digital payments multiple times a week, with one in four using mobile phones for payments 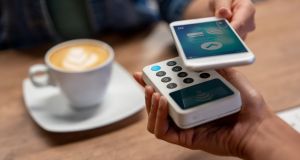 Millennials – the cohort aged between 18 and 37 – are most likely to pay for things using contactless or digital, with 57% saying they favoured such methods over cash

Cash is no longer king, and the shift from physical money to its virtual equivalent has reached a tipping point, a survey published on Friday morning suggests.

The research reveals that half of Irish adults now use digital banking or contactless transactions more than they use physical money, and it says two out of three Irish adults use digital payments multiple times a week, with one in four using mobile phones for payments.

The survey from One4All says 43 per cent of people believe cash is on the way out. Irish adults now carry an average of just €32, with one in 10 respondents saying they never carry cash at all.

The nationally representative study of 1,000 people shows that 67 per cent of millennials – the cohort aged between 18 and 37 – expect all retailers, shops and bars to accept digital or contactless payments.

People living in Connacht and Ulster are less likely to use digital banking or make contactless payments compared to people in other regions. Only 22 per cent of respondents there said they made a contactless or digital payment at least once a day, while in Dublin the percentage who use such payment methods climbed to 34 per cent

Millennials are the demographic most likely to pay for things using contactless or digital, with 57 per cent saying they favoured such methods over cash.

A decade ago more than 60 per cent of people used cash to make payments, but that percentage has fallen steady over recent years.

The move away from cash has seen banks exit the ATM market with all the major banks in Ireland currently in the process of selling off cash dispensing machines which are costly to maintain and to secure.

Charities have also been suffering as people carry less cash, prompting some to move into the digital sphere. Before Christmas the St Vincent de Paul launched a “tap to donate” initiative which allows people to tap their debit or credit cards or their phones and watches on devices held by collectors to donate to the charity.