Total of €744m worth of home loans approved in January, figures from lobby show 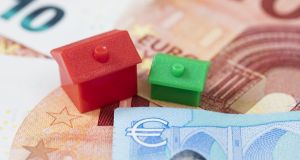 Data from the Banking and Payments Federation Ireland show that first time buyers accounted for 1,590 of the 3,265 mortgages approved last month. Photograph: iStock

First time buyers remained the driving force for new mortgage approvals in January when a total of €744 million worth of home loans were given the green light, new figures show.

Data from the Banking and Payments Federation Ireland (BPFI) show that first time buyers accounted for 1,590 of the 3,265 mortgages approved last month, a rise of 7.5 per cent on the same month in 2019.

There was growth across all category of homeowners in the period with the total number of mortgages approved also up 7.5 per cent compared to January 2019, figures from the representative body for the banks show.

By value, first time buyers were the largest group, accounting for €371 million in approved loans. Movers were second, getting 885 mortgages approved at a value of €226 million.

“Mortgage approvals in January show a strong uplift in activity both in volume and value compared to the previous month as well as the previous year. This uplift remains evident for first-time buyers who continue to dominate the overall market and account for almost half of all approvals by volume and value,” said BPFI chief executive Brian Hayes.