UK created jobs at pace in fourth quarter despite Brexit 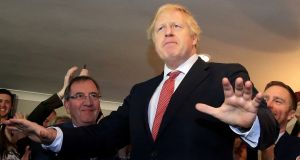 The UK economy created jobs at an impressive pace in the fourth quarter, defying the political turmoil over Brexit.

The number of people in work rose a larger-than-forecast 180,000, leaving the jobless rate at a four-decade low of 3.8 per cent, the Office for National Statistics said on Tuesday.

The jump came in a quarter that saw a second Brexit deadline missed and prime minister Boris Johnson hold a general election to break the parliamentary deadlock.

The economy as a whole avoided contraction after December was better than expected. After the jobs report, the pound was little changed and traded at $1.2994 as of 9.32am in London.

The strength of the labour market may fuel speculation that the Bank of England will refrain from cutting interest rates this year.

The economy has picked up since Johnson emphatically won the election, and growth is expected to be boosted by a significant fiscal stimulus when new chancellor Rishi Sunak delivers his budget next month.

Risks remain, however. Johnson has ruled out extending the Brexit transition period beyond December 31st, even if no trade deal is in place.

Vacancies, which have been falling, rose by 7,000 in the three months through January, and employment in the fourth quarter hit a record high, driven by full-time employees.

Women accounted for over 80 per cent of employment growth and now make up almost half of the total.

Adjusted for inflation, regular pay climbed above the pre-crisis peak reached in 2008.

Total earnings slowed in the fourth quarter, with regular pay rising 3.2 per cent on the year and wages including bonuses gaining 2.9 per cent – the slowest since 2018. However, they are still outpacing inflation of less than 2 per cent.

Productivity, which has languished since the financial crisis, rose 0.3 per cent from a year earlier on an output-per-hour basis, its second straight quarterly gain.

The number of European Union nationals employed in the UK rose by 36,000 from a year earlier, or 1.6 per cent, in the quarter before Britain left the bloc. – Bloomberg