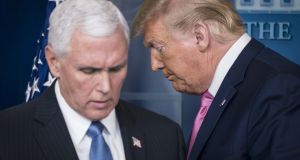 When Donald Trump puts Mike Pence in charge, you know something unusual must be happening. Photograph: Sarah Silbiger/Bloomberg

When Donald Trump puts Mike Pence in charge, you know something unusual must be happening. Trump has asked his vice-president to lead the response in the United States to coronavirus, which underlines just how seriously the potential threat of a pandemic is being taken there, despite clumsy attempts to play it down.

There is the obvious threat to human health and life. After that, there are severe economic threats associated with the virus, which is why markets have been reeling. Within those economic threats, there are few sectors more exposed to the potential impact of a pandemic than international tourism and hospitality.

Much of the recent growth in the Republic’s tourism and hospitality industry has been fuelled by a surge in US visitor numbers, as the sector here sought to reduce its reliance on British visitors in the wake of Brexit and a slump in sterling.

Leaders of the hospitality industry here will therefore have groaned at Trump’s performance last Wednesday, as he handed over responsibility for combating the virus to Pence at a press conference.

The image was on every news network in the US, helping to spur the fear that the virus outbreak could spiral into a major American crisis. From past experience – the two Gulf wars and 9/11, for example – we know that the numbers of US tourists abroad can dip by up to a fifth overnight when a crisis hits.

That would be devastating for the hospitality industry here, especially in hotspots for US visitors such as Killarney and the southwest. The industry is right to be concerned at the virus-laden pall that has descended over the US.

It doesn’t matter whether or not there is a major spike in cases there. It matters only that there is already a spike in Europe, which will affect the confidence of travellers from the US.

The number of US visitors to Ireland was already stuttering before the potential impact of the virus became a factor. Over all of last year, growth in the number of North American visitors to the Republic slipped to 1.2 per cent after about five years of far stronger increases. In December, arrivals fell by about 5 per cent.

North American visitor numbers to Ireland rebounded in January by 2.9 per cent, according to the latest State data from the Central Statistics Office. But now that the coronavirus and an associated fear of travel to Europe may become a factor in coming months, that fillip is likely to be short lived. Throw in the fact that North American winter air access to the State is already reduced by 9 per cent this year, and the outlook does not look good.

The global spread of a new virus, or even the vaguest hint of such a threat, is really a media reporting pandemic, as much as anything else. It quickly spreads into newsrooms and the minds of editors across the world. Before we know it, the reporting takes on a feverish intensity out of all proportion to the actual health threat.

The breathless reporting is perfectly appropriate, however, for the size of the economic threat, especially when it comes to the tourism and hospitality sectors. There has yet to be a single confirmed case so far of coronavirus in the State, but the illness has already landed a few high-profile economic blows here.

The cancellation of the men’s and women’s Six Nations rugby matches against virus-threatened Italy in Dublin next month will be acutely felt by the capital’s bar owners, restaurateurs and hoteliers. Unless the European spread of the virus obviously slows over the next week or so, it is likely that the St Patrick’s Day festival will also come under threat. It attracts tens of thousands of visitors to Dublin from around the world. Its possible future cancellation would have a far greater impact than a Six Nations game.

Medical experts believe the spread of the virus should slow down significantly as the weather improves in the coming months. But what if it doesn’t? Dublin is due to host four matches this summer as part of the Uefa Euro 2020 football championships.

It would take a massive increase in the number of coronavirus cases to put the tournament at risk. But if it comes to that, there is another huge hit for the industry.

Realistic fears have already emerged that the Tokyo Olympics this summer may have to be cancelled. If that happens, and other high-profile events are affected, what hope is there for smaller, but more locally significant, events at venues such as the Convention Centre Dublin, the 3Arena and the RDS?

The Republic’s largest hotel operator, Dalata, this week reported solid full-year results. The stock market-listed group felt obliged, however, to put a line in its statement about the potential threat of coronavirus.

Dalata chief executive Pat McCann said later last Tuesday that in his experience, such threats usually quickly recede and the hospitality industry “rapidly” bounces back. As the economic threat of coronavirus loom over the Irish sector, his fellow hoteliers will be hoping he is right.

When the American economy sneezes, Irish tourism catches a cold. If the US begins to feel the effects of coronavirus, it would be far worse indeed.

This week, UK-listed Wagamama chain owner The Restaurant Group announced it plans to convert scores of its other restaurants to the Asian chain, as it appears to be outperforming other casual dining brands. It also announced it is bringing Wagamama to the US in a joint venture.

Wagamama is run on a franchise basis here by Press Up, which also owns bars such as the Liquor Rooms and hotels including The Dean. Despite an apparently booming economy here, the Irish performance appears to be lagging, based on its most recent figures.

Wagamama in Ireland is operated by the Press Up entity, Portalon. Its most recent accounts, for 2018, show sales over the year fell by almost 14 per cent to €6.3 million. Staff numbers fell from 162 to 118, as management cut costs to protect earnings.

At Crawley, the Press Up entity that runs Captain America’s, 2018 turnover fell from €5.1 million to €4.4 million, driven by a sharp drop in food sales.

A note to the accounts for Orsen, the main Press Up group reporting entity, shows that in 2018, it took control of three companies that year, including Svetac, which operates Wowburger; Valamar, which operates the Stella in Rathmines; and Molana, which is linked to a Press Up premises on St Stephen’s Green. The three entities’ total revenues in 2018 were €5.2 million, it says, but the losses were €1.3 million.

The Press Up group relies less on tourists and more on spendthrift locals and corporate bookings. So McKillen won’t be terribly worried about the impact of something like the coronavirus. Press Up’s restaurants do not look to be immune, however, from the intensification of competition that has gripped the sector recently, and which has been keenly felt by others such as Fallon & Byrne.

Press Up tried to float in 2018 before pulling back. In 2019, it tried to sell 45 per cent of the business to a strategic investor, before abandoning this plan yet, too. What does McKillen have in store for the group for 2020?

1 Should my mam wait for house prices to drop before buying?
2 Cheers: Conor McGregor's whiskey races up the sales chart
3 Two prominent business leaders in planning row with neighbour
4 ‘I’m so lucky to be in the Caribbean – a million miles from Derry Girls’
5 Joint accounts: if one of us dies, can the other access the money?
6 ‘The recovery needs to be a full-scale economic renewal’
7 Battle for control of America’s mammoth utility industry set to intensify
8 US ‘hard seltzer’ drink White Claw launches in Ireland
9 Military-style planning can help businesses battle Covid-19 survival threat
10 Citigroup warns that markets are out of step with reality
Real news has value SUBSCRIBE