Dublin workers earn on average 15% more than rest of State 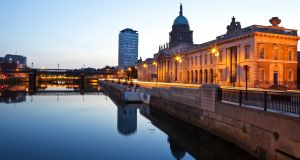 The data shows Dublin had the highest average disposable income per person in 2017 of €23,864. Photograph: Getty images

Workers in Dublin city and county earn on average 15 per cent more than their counterparts in other regions in the state, according to figures from the Central Statistics Office (CSO) .

The Dublin figure was also 41 per cent higher than in the Border region, where workers had the lowest per-capita disposable income of the eight regions at €17,051.

Of the remaining regions, only the mid east (€21,354) and the mid west (€20,623) had an average disposable income per person on a par with the State average.

The figures show the gap between the maximum and minimum value of per capita disposable income, on a regional basis, decreased marginally since 2016 due to incomes in the Border region rising faster than those in Dublin.

Significantly, the divergence in income between the regions and Dublin was at its lowest in 2010 at the height of the financial crisis and widened in subsequent years.

Dublin incomes were also on average 19 per cent higher than the State average €21,495.

Besides Dublin, Limerick, Kildare, Meath and Wicklow were the only counties where per capita disposable income exceeded the State average in 2017 with Cork, Tipperary, Westmeath and Laois just below.

The figures come in the wake of a report showing Irish households shoulder one of the lowest tax burdens in the EU.

Eurostat estimates that 20.3 per cent of the gross disposable income of Irish households went to pay taxes on income – so-called direct taxes – and indirect taxes such as VAT and excise duties in 2015.