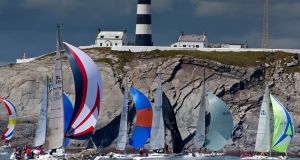 If ever there was a bellwether for the health of cruiser racing, sailmakers are pretty much at the core of the sport throughout the world.

Ireland is no exception and, by all accounts, the industry is warming up in advance of the main season – now just weeks away – and there are noticeable positive economic indicators.

Bigger regattas such as the O’Leary Life Sovereign’s Cup in Kinsale and the Volvo Dún Laoghaire Regatta are gearing up for extra demand, while the annual ICRA Championships will be held at the Royal St George Yacht Club. Offshore events such as the Dún Laoghaire to Dingle and Fastnet races are also certain to see strong fleet turnouts; the latter recently “sold-out” its 350-boat limit in just four minutes.

“A lot more people are upgrading their sail inventory this season compared to usual, so I would say that things are definitely on the up,” commented Graham Curran, the Dublin-based manager of Crosshaven’s UK Sailmakers.

“There are also more bigger boats, in the 40-50-foot range, arriving into Dublin and Cork, which is a good sign.”

The modern sailmaking business is more than just producing the “engines” that power yachts; the modern era is as much about sail-training, and the major lofts in Ireland are constantly helping their customers to improve results on the water.

UK Sailmakers are planning a lap of the country, starting in Dunmore East on Thursday and averaging two a week for the next two months as boats hit the water, while their team member Mark Mansfield, a multiple Olympic veteran, is booked almost every weekend for coaching in the summer.

Part of the tour will include encouraging local class captains to take up the Irish Cruiser Racing Association coaching grants.

North Sails Ireland are also busy with pre-season preparations, with more than eight sessions delivered since the start of the year, catering for several hundred sailors at packed clubhouses.

“We’ve been delivering workshops and seminars in Ireland for well over a decade,” said Maurice “Prof” O’Connell of North Sails Ireland. “The presentation includes the North U Sail Trim Simulator, a piece of software that allows users see how the various sail and rig controls affect the speed of the boat – it brings the presentation alive.”

O’Connell also suggests that owners and crews are taking race preparation much more seriously and cites the Citroën South Dublin Spring Chicken at Dún Laoghaire, the weekly fun Sunday outing for the off-season that attracts dozens of cruiser-racers.

One crew that he coaches is on board and ready to sail at 0830, a full two hours before racing begins. “It’s the difference between sport and leisure activity,” reckons O’Connell.

Meanwhile, on the west coast, the Galway-based West Sails has now officially become part of the international Doyle Sails group.

Aside from regular local business, enquiries are coming from Belfast and Dublin, according to sales consultant Evan O’Connor. “Sailing as a sport has never been stronger – we’re getting back to where the economy was,” he told The Irish Times.

Doyle also expect to be on site for the Figaro stop-over in Kinsale later this year, given their strong connections to both the event and venue through noted Galway-based short-handed sailor Yannick Lemonnier and the loft’s managing director Donal Small.