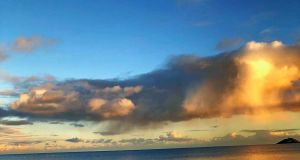 Ballycotton Bay in East Cork: will be the venue for the lucrative shark-fishing competition from September 12th to 15th.

Ballycotton in Co Cork will take centre stage of sea angling later this year with the hosting of the biggest fishing competition ever held in Ireland or, indeed, across all European countries.

With a massive prize fund of €250,000, this four-day shark festival has the potential to raise Ireland’s angling profile to premier status and to put this beautiful East Cork coastal village firmly on the world stage.

The groundbreaking endeavour is the brainchild of Ballycotton-born millionaire Pearse Flynn who has made his fortune in financial services as owner and chief executive of insolvency practitioners Creditfix Limited.

Mr Flynn, himself a keen deep-sea angler with experience of big game fishing in Florida and elsewhere, has invested this vast amount of money to attract competitors from across the world to help raise the tourism potential of his beloved homestead.

Ballycotton is no stranger to big fish. In fact, five Irish records are credited to the area, the earliest, a pollock of 19lb 3oz caught in 1904 and a common skate of 221lb in 1913. Perhaps we will see a new record shark from this extravaganza!

Applications are now being accepted and while perhaps the finer details are still emerging, the following protocol is in place. The four-day event will take place from September 12th to 15th, fishing out from Ballycotton Pier.

Entrance fee is €5,000 per angler with a maximum of 120 entrants utilising 20 half-decker boats, each with six anglers. Six balloons will be afloat and a rotation of anglers will take place throughout the day. A team of four has the option of fishing one day each.

Shark species sought will be blue, mako, thresher and porbeagle, and strict catch-and-release rules will apply. Fisheries staff will also tag each fish for recording purposes.

Ballisodare’s new security system
A new security installation at Ballisodare Fishing Club in Co Sligo will help protect this important private fishery against the vulnerability of illegal fishing. The fishery is the entry point for salmon from the tide into freshwater and large numbers of fish are often present.

The project includes a state-of-the-art fishery office and two public viewing platforms. The security aspect to support protection activities has modern lighting alongside a CCTV system to allow for 24-hour monitoring and cameras with night vision mode and flood lighting.

The project was supported with funding of €20,000 from Inland Fisheries Ireland’s National Strategy for Angling Development.

Ballisodare’s fishery director, Dermot Glennon, said: “The Ballisodare River is an excellent salmon fishery which boasts an average catch of 1,500+ each season. We are delighted to have installed this security system with support from IFI and look forward to continuing to welcome domestic and overseas anglers to this site for many years to come.”

New bye-law for bass angling
The following updated bye-law from the Department of Marine for sea anglers with regard to European bass angling will apply throughout 2019.

From 1st January to 31st March and from 1st November to 31st December 2019, only catch-and-release fishing shall be allowed. During that period, it shall be prohibited to retain on board, relocate, tranship or land bass.

From 1st April to 31st October 2019, not more than one bass may be retained per fisherman per day.

Waterford Trout Angling Association is hosting a charity competition in aid of the South East Simon Community this Saturday (March 9th) at Knockaderry Lake. Admission is €30 and open to all. To enter, contact Michael Sheehan, by return, at (086) 107 3086.