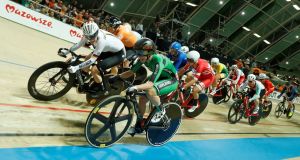 Irish riders had a strong showing on day one of the UCI Track Cycling World Championships in Pruszków, Poland.

The women’s team pursuit squad of Orla Walsh, Mia Griffin, Alice Sharpe, and Kelly Murphy impressed on their world championships debut, breaking the previous national record of 4 minutes 31.66 seconds by more than two seconds in the qualifying session. They clocked a time of 4 minutes 29.148 seconds, netting tenth in the competition.

“To come from the European Championships last summer, which wasn’t a great ride, to top 10 in the world with everyone showing up with their A-game is a great achievement for us, a new team,” said Walsh.

Murphy said that their pre-championship goal was achieved.

“We came here to ride under four minutes 30 seconds, finish in the top 10, and break the Irish record. We prepared pretty hard, and our coach Brian Nugent got us in the right zone for the day. We’re really satisfied with the result.”

Griffin said that the aim is to maintain the same rate of improvement.

“We want to continue progressing as we have done all this year,” she explained. “We’re going to put our heads down, stay focused after the summer and go into the Track World Cups ready.

“We want to try to keep knocking off the same amount of time we have been knocking off consistently through each of the World Cups this season.”

Meanwhile Lydia Gurley had an aggressive ride in the women’s scratch race, launching a solo move heading towards the final kilometre of the race. She was reeled in with two laps to go, and placed 12th. Britain’s Elinor Barker took gold.

In other news, Dan Martin placed 18th on stage 4 of the UAE Tour.

He crossed the line four seconds behind the stage winner Caleb Ewan (Lotto Soudal), who was quickest up the short, steep ramp of Hatta Dam. Martin stays sixth overall, and is now one minute 1 second behind the race leader Primoz Roglic (Team Jumbo-Visma).