Michael Conlan ready to deal with the expectation once again

Irish fighter on family, idolising Jamie and why a Frampton fight would be bad for Belfast 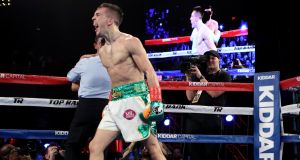 Not far from Epsom Downs Racecourse, Irish featherweight boxer Michael Conlan sits in his rented accommodation and reflects on his transient lifestyle. “It’s a nice part of the world here in Surrey, but when I’m here I’m just a hermit. I eat, I sleep, I train and, maybe if I’m feeling adventurous, I might go to the cinema. It sounds fairly dull, but I just have to live this life during these years to give my family everything they need.”

Conlan boasts a record of 10 fights and 10 wins as a professional, with six coming by knockout. A two-time Olympian, he won bronze in London in 2012 before following that up with a World Championship gold in 2015. Conlan was predicted to win gold in Rio de Janeiro before losing a highly contentious decision in the quarter-finals. The image of Conlan vehemently protesting the decision in the ring could have been a tragic footnote to his boxing career, but instead it built searing momentum to his professional debut.

Two years ago Conlan debuted at the Madison Square Garden theatre on St Patrick’s Day, led into the ring by UFC star Conor McGregor. “When you think about it, on my debut I was able to experience a crowd that 90 per cent, or maybe even 95% of professional fighters don’t get to ever experience. The crowd was filled with Irish fans and then I was getting led in by Conor in New York, who is someone I admire to this day. There was so much expectation on me and I thought to myself: ‘Please just get this job done and don’t let those people who have come to see you down.’ Thank God I didn’t.”

Backed by Top Rank, Conlan’s early career was spent in Los Angeles. “LA was an interesting time for me. I was lucky to have my partner Shauna and children over, and they loved it. I just found it so lonely if I’m honest. No sunshine can compensate for not having your friends and family near. I was very grateful for the training I received and what I learnt in the ring, but I soon knew it was time to be nearer home.”

Conlan resettled his family in Belfast and now travels to England to work with trainer Adam Booth. The move has worked both professionally and personally. He has formed a strong bond with Booth and returns home regularly during camps. Family is an integral part of Conlan’s life and his brother Jamie, a fellow professional fighter, remains a close confidante.

“If my brother Jamie had been into football or hurling, not boxing, I probably wouldn’t be here doing this interview. Growing up I always idolised him. Whatever he did, I wanted to do. He’s always been such a huge part of my development, encouraging me and wanting me to do well. Jamie is a different style of fighter to me. I always hated watching him fight: he just went to war every time he got between the ropes and I felt helpless. Now he’s not fighting, he’s always there for me, making sure everything’s perfect outside of the ring. I couldn’t ask for more.”

The Conlan brothers have added to their intimate circle over the years. Fellow Irish Olympic medalist and professional boxer Paddy Barnes is a close friend and Conlan enjoys a strong friendship with fellow featherweight Carl Frampton. There are five years between Frampton and Conlan, which had led to speculation about a fight between the two featherweights.

“I’ve always admired Carl, not just as a fighter but how he handles himself outside of the ring. He’s always decent to everyone. When I was younger, I just wanted the world and even said I’d like to fight Carl at one stage. Then I got a bit older and thought this wouldn’t be good for our city. Even when I was carrying on like that, Carl always spoke well of me and our friendship has just grown. I see him as one of the truly great Irish fighters and will support him as he always supports me. He’s a gentleman and that’s it.”

Conlan’s suggestion that fighting Frampton “wouldn’t be good for our city” is a reminder that both men are from differing and distinct communities in Belfast. Frampton grew up in a loyalist part of Belfast that largely identifies as British, while Conlan is from a nationalist community that identifies as Irish. Frampton has often been heralded as a unifying figure due to his apolitical stance, whereas Conlan proudly states his Irishness. Does he ever feel that he has been misconstrued?

“I say I am proud to be Irish and walk out to Irish music, but it’s never meant to be divisive. I am simply proud of where I’m from like many people. I have absolutely no ill-feeling to anybody, Catholic, Protestant, whatever. I don’t care what someone’s background is. I take people as I find them and that’s it.”

Conlan is currently preparing to fight at the Madison Square Garden theatre for a third St Patrick’s Day running. He hopes to beat Ruben Garcia Hernandez, a tough and durable Mexican, and potentially set up a fight against Vladimir Nikitin, the Russian who was awarded that controversial victory over Conlan at the Olympics in Rio.

Headlining the St Patrick’s Day show in New York does not worry Conlan, but there is one part of the day he dreads. “Sometimes, on the day of a fight, maybe around lunchtime, I just want to go to sleep, wake up and the fight is over, I’ve won and I can just go home to my family. It’s not fear or anything like that, it’s just sheer impatience. I have always hated waiting, even as a young kid. Before a fight those hours and minutes just seem to go so slowly. The thing is, once you eventually walk out and hear the noise and see all those fans, you remember why you’re so lucky to be in this position.”

For now, Conlan is focused on securing his 11th straight win as a professional. “I’m dealing with the expectation well. There’s been expectation ever since I made my debut and it’s up to me to keep delivering. It’s prize fighting and I’m not in this game to earn buttons, I know it’s a short time at this level and it’s up to me to deliver for my family.”

“Now I’m older, I do wonder, if I had used this intense focus and drive I have for fighting at school, where that would have taken me. At the time, I just wasn’t a great student. My mind wasn’t really in it. Whereas now I’m older, I see the huge value in education and it’s something I regret. Education is something I will absolutely push in the future and I will give it everything.”

For generations, Irishmen and women have staked their fortunes at Epsom. Every morning, as the sun rises near that famous racecourse, this thoroughbred fighter begins training and sparring in the ring as he seeks to secure his family’s future. He hopes all those lonely hours will pay off when he walks out in front of a crowd of green in New York City.