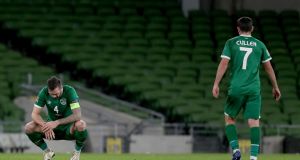 Ireland’s Shane Duffy and Josh Cullen dejected at the end of the game. Photo: Bryan Keane/Inpho

The wait goes on. It’s now seven matches since Ireland last scored a goal and Stephen Kenny must be wonderingif his opening spell as manager could have gone much worse. With 14 players missing and seemingly nobody able to put the ball in the net it was another frustrating night last night although a 0-0 draw with Bulgaria did, mercifully, save Ireland from Nations League relegation. The manager is doing his best to stay upbeat and said afterwards that the campaign will stand to his side after the much-needed break they now face before 2022 World Cup qualifiers begin in March. All in all it was a pretty crazy week for the squad and the manager as the absentee list grew at every turn and, as Mary Hannigan writes, the nation held its breath last night, just not for quite the same reason as in 1990. While there wasn’t too much to be gained from another drab draw there were some highlights of sorts and Patrick Madden has run the rule over Kenny’s team.

On to rugby and Andy Farrell selected his team yesterday to face England on Saturday with the Ireland head coach retaining faith in a number of players from the side that beat Wales while also fully aware that this weekend poses a huge physical challenge. “The way that we’re going with our game is all about decision-making and being in the moment. Being adaptable to what the game offers for us is our way forward,” Farrell said yesterday. One player who was impressive against Wales and who keeps his place this weekend is James Lowe. The New Zealand-born wing enjoyed a stellar debut last week and, as John O’Sullivan outlines in his rugby stats column, he made an instant impact from the off. Quinn Roux also stays in the side and yesterday he was asked about the famous “soft” remark made by Rassie Erasmus during last year’s Rugby World Cup but the South African lock says he takes no interest in that sort of external noise.

1 Sinn Féin TD Brian Stanley apologises for ‘inappropriate’ tweet
2 Government may yet face hardest call on Covid-19 restrictions
3 Maureen Dowd: A brother’s lament for Donald Trump
4 Coronavirus: Donnelly warns State entering ‘uncharted territory’
5 Ireland 23 Georgia 10: How the Irish players rated
6 Sordid murder of hurling brothers still resonates in south Galway
7 Ireland’s teenage pariahs: ‘We are really at breaking point now’
8 400 – yes, 400! – Irish retailers for all your online Christmas shopping
9 Majority of Dublin’s Airbnb-style lets return to long-term market
10 Older men’s fixation with younger women really boils my kidneys
11 Almost 730 consultant posts vacant, say doctors
12 Ireland’s autumn of discontent continues with abysmal Georgia showing
13 Gardaí investigate George Gibney over abuse allegations
14 Late Late Toy Show duet with musical hero ‘absolutely mad’ says delighted teen
15 Adam King’s family ‘blown away’ by response to Toy Show appearance
16 OECD unclear how ‘rigid’ Leaving Cert prepares students for future
17 Greek potatoes: Incredible served with lamb chops and tzatziki
18 Viggo Mortensen: It ‘felt awkward’ replacing Stuart Townsend in Lord of the Rings
19 Tom Barry showed great military expertise, says historian
20 Covid-19: 299 cases and two further deaths reported in State
21 Michael J Fox: ‘In the wheelchair, I’m luggage. No one listens to luggage’
22 Northern Irish businesses ‘horribly exposed’ by Brexit ‘mess’
23 Ireland grind their way to grisly win over Georgia
24 Keanu Reeves: ‘Grief and loss are things that don’t ever go away’
25 Una Mullally: Restriction-lifting opens menu of activities from which to choose
26 Almost 7,500 people avail of ‘Man in a Van’ grant
27 I yearn like a hungry dog for a camouflage Dryrobe
28 No fireworks but Limerick get the job done against Galway
29 Fixing two-tier pay system has to fit in with overall health reforms
30 Fintan O’Toole: To counter vaccine sceptics, we must understand them
31 Life under Level 3: What stays open and where can I travel?
32 Nicky English: No surprise that Limerick and Waterford in final
33 Late Late Toy Show: Music, tears, Tubridy’s F-bomb and €5m for charity. What a night!
34 Chinese vase valued €800 sells for €1.2m at Irish auction
35 The Crown’s Josh O’Connor: ‘I’m a republican. I’m not interested in the royal family’
36 Will Europe shut down its ski resorts this winter?
37 Mind that cat – and its impact on wildlife
38 Helena Bonham Carter: ‘People choose to sleep with powerful people. I got two children out of it’
39 Reform of legal training long overdue and much-needed
40 It is a mistake for Dublin to turn its back on co-living
Real news has value SUBSCRIBE