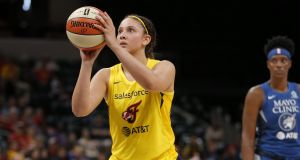 Natalie Achonwa: ‘Being part of a league that’s 80 per cent black women is how my desire and use of my platform has changed, especially now.’ Photograph: Jeffrey Brown/Icon Sportswire via Getty Images

Natalie Achonwa is not your average Women’s National Basketball Association (WNBA) star. Playing with Indiana Fever and, at the time of our conversation, hunkered down in Italy for Famila Wuber Schio in the women’s Serie A1, Achonwa has one eye on the US election, which at that time was waiting for the result that would make Joe Biden president-elect.

Achonwa knows it’s an important election. From being centre stage at Black Lives Matter protests and in the WNBA social-distancing bubble – dubbed “wubble” – in Orlando, Achonwa has become a leading player and leading activist.

“I was fortunate enough to learn from a great leader and coach, Muffet McGraw. She’s somebody that is passionately her, she is unapologetically her. How bold she is and how strong she is gave me the confidence to be myself. That’s really where this platform started to develop and how I use it,” she explains.

“Traditionally, I really just spoke out for women and the inequality that we face and discrimination in the workforce, especially being a part of the WNBA. Being part of a league that’s 80 per cent black women is how my desire and use of my platform has changed, especially now. Especially around this election too, in such an uprise or re-rise of racial tension in the USA, it has really pushed me to focus on speaking out and using my voice to help in any way I can. Help bring to the forefront the necessities for racial and social equality for women, for black women, for black people and how it is time to continue to push for change.”

Colin Kaepernick may have been the first one to take a knee in the National Football League (NFL), but observers of women’s sport are keen to stress the WNBA was first. In fact, Natalie Achonwa and her Fever team-mates were the first to use their platform to highlight racial inequality.

Job security is hard to obtain and maintain in sports, but it’s more precarious in women’s sports.

“Women’s sports, and women’s basketball even more than that, we are probably, in terms of job security, one of the lowest on the tier. That’s unfortunate, it shouldn’t be that way. At the same time, we were thrown into activism.

“That’s why we’re so passionate, invested in it, because it’s who we are. We don’t get to take off the colour of our skin, we don’t get to change the fact that we’re black women when we take off our jersey. That’s why it’s so easy for us to take a stance and stand for what’s right.”

Initially, the WNBA weren’t keen on players using their platforms to highlight racial and gender issues in the world. But as more and more players started taking a stand, a shift in opinion – and extreme ones – took place.

“For so long women’s basketball, particularly even in the WNBA, we were trying to just fit in this box because that got us the likes. Where this huge growth and explosion of being comfortable with who we are has brought more people to love the WNBA.

“It’s brought genuine passion out of the players. It’s finally like a moment of, this is who we are and we no longer care about your little box. You get to see the true diversity of our league, the strength of our league, the strength of these women that are in the league. I always say this because it gives me motivation, it’s just when I look around at my colleagues and see why I am fortunate enough to play amongst [...] the badass women in the WNBA: business owners, multiple degrees, mothers. It’s incredible, the intelligence and the depth of personality and the diversity of personality that we have in the WNBA. It’s just like a change of the guard. Just be who you are and own it.”

Sponsors, fans and people in the community weren’t overly impressed initially when Fever took the knee. While the idea was just to raise awareness and highlight the injustices, Achonwa insists these conversations must be had to bring about change. “If you don’t spark conversations, then you don’t truly know how people feel or what people think. That’s the start of change, is the spark of change, is sometimes people just get utterly complacent in living in their circles and living in their communities. They aren’t able to empathise with those that are not or empathise with those that are going through things.”

Micro-aggressions and covert racism come up. While we can all see a police officer kneeling on a black man’s neck, an officer shooting a black person, some of us can’t understand more profound levels of racism. Some don’t even want to see. For Achonwa, it took her a long time to understand it herself.

Not everyone necessarily has that blatant racist event that they experience, but it’s the little things that eat away at you

“Honestly, I was laughing because even in my own journey it took me even understanding [...] the depth of those micro-aggressions to even see some of the experiences growing up that I didn’t even realise was racism. I grew up in Guelph, a tiny town. The majority are white people. I went to school and was one of a few black families. Those are things now that I look back and I’m in the moment. No, they didn’t necessarily matter to me or I didn’t realise the micro-aggression of it. The comments of some of my peers in the winter saying, ‘I’m darker than you.’

“As a mixed-race person – father Nigerian, mom German – I’m trying to find my own identity where I’m not white enough for my white side of my family and I’m not black enough for my black side of the family, how that subtly eats at you. Comments of ‘I like it better when you straighten your hair’, things like that, that you don’t even realise are racism, are embedded in people’s thought process and once again could not be malicious.

“People could not be aware of it. I’m sure my friends that loved me deeply weren’t aware of how traumatic that could have been for me or how that ate at my own self-confidence, my own self-identity. Shoot, I wasn’t even aware of it. Now, that’s the challenging part. Not everyone necessarily has, I guess, that blatant racist event that they experience, but it’s the little things that eat away at you, that eat away at your identity.”

As part of Achonwa’s activist work as a WNBA star, she, along with her fellow athletes, has become a Glossier body hero. Glossier is a skincare and make-up brand designed to promote inclusivity from race to body types. As Achonwa expresses passionately: all bodies are different and that’s okay, but she has one significant reason why.

“A big part of my why and why I even do any of this is that next generation. It’s those girls that, once again, look like me that might not have had those role models or people to look up to that look like them. Here’s an opportunity for me to be a part of a campaign with a major beauty brand and letting girls and boys all over know that you’re beautiful in your own right and to never change that for a false perception of perfection that you see on social media these days.”