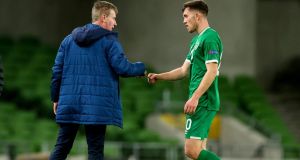 Stephen Kenny admitted that he was relieved that Ireland have not been relegated to the third tier of the Nations League but admitted that it not something to take much pride in.

The Dubliner said that he was disappointed not to end a difficult spell with the first win of his time in charge but insisted that the squad will be stronger for him having had to use less experienced players. His side will, he maintains, be in good shape to contest the World Cup qualifiers when the campaign gets under way in March, although they will have to cope with the consequences of being third seeds when the draw is made at the start of next month.

“It’s very important that we weren’t relegated but it is not something to celebrate,” he said, after the scoreless draw with Bulgaria concluded at the Aviva stadium.

“The playoff game was the big game for is,” he said. “Obviously we were beaten but we played well. We have used the Nations League to blood players and that will stand to us in the future.

“In the first half tonight, with three debutants playing, we weren’t very cohesive, our passing was erratic. We never really got our wide players into the game in that period and that was an issue and we caused ourselves some problems with some careless passes.

“But, overall, I think it gives us a much, much broader panel for the World Cup games in March. There are new players here who are going to challenge for places and we will need that, particularly if they are going to be three game windows in the World Cup qualifiers.”

Here, he said, the players, old and new, had come off disappointed that they hadn’t been able to score the goal required to win the game but they had done well, he insisted, in very difficult circumstances.

“I think you have to look at it in the context of what the players have had to endure over the last couple of months,” he said. “Covid related issues almost every day . . . it’s been a very unsettling period for the players and their families.

One of those to get a chance to make his mark was striker James Collins, who admitted to being disappointed himself not to have got a goal.

“The players won’t shy away from it, though” he said. “They are men and they play at the highest level for their clubs. They know what is required of them to win games, and that’s to score goals.”

Like his manager, he believes they will come in the new year although eight games in and it is still far from clear from where.