Paul Hornung: The hard-drinking, hard-smoking playboy of the NFL 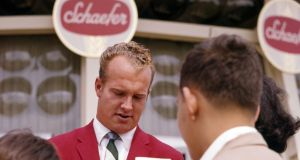 The Miller Lite commercial began with a cheesy voiceover asking, “Why is Paul Hornung successful with women?” Then, the camera cut to the handsome Green Bay Packer opening the door of a sleek limousine. A long female leg, short skirt riding perilously near the top of the shapely thigh, emerged from inside the vehicle. At which point, Hornung smiled broadly and answered, “Practice, practice, practice.”

In another film noir advertising spot for Marlboro, Hornung ambled around an empty Wrigley Field in Chicago to a wistful soundtrack. Wearing a trench coat with the collar up, often staring into the distance, he dragged on a cigarette in the insouciant manner of a hard-boiled detective about to solve a crime. Instead, he extolled the virtues of tobacco over a highlight reel of the memorable day he broke the NFL’s single-season scoring record at that very stadium.

Sepia-tinted footage from a different, unreconstructed era, a time when sexism was a big seller, cigarettes were still regarded as cool, and Hornung was known to America, simply, as “Golden Boy”. After battling dementia for years, he died last week at 84, leaving behind a grid-iron resumé and a reputation for carousing like few others. A native of Louisville, Kentucky, (the family were Irish and German), he was a star quarterback and so much more at the University of Notre Dame before morphing into a running back-cum-field goal kicker for the Packers’ dynasty of the 60s that won four national championships.

The team was managed by the iconic Vince Lombardi, author of “winners never quit, quitters never win!” and a thousand other pithy slogans destined to hang on locker-room walls for as long as sport is played.

“Hornung,” the notorious martinet roared in frustration one day, “What do you want to be, a playboy or a football player?”

“I want to be a playboy,” said Hornung without missing a beat.

He titled his first autobiography Football and the Single Man yet somehow Lombardi tolerated his excesses (he enjoyed a half-time smoke) and his bacchanalian lifestyle. Why? Because the coach reckoned there was none better when the team was inside the 20-yard line. The game on the line. “The competitor never lived,” he said of the player he fined the most for breaching curfew, “who came up bigger in the clutch.”

As prolific on the field as off it, his versatility ensured he shattered scoring records with the ball in his hand and at his feet. When an ill-timed call-up to the US Army reserve jeopardised Private First Class Hornung’s chances of playing in the NFL championship against the New York Giants in 1961, somebody sent word to the White House and the military suddenly furloughed him.

“Paul Hornung isn’t going to win the war on Sunday,” said President John F. Kennedy, explaining his decision to get involved. “But the football fans of this country deserve the two best teams on the field that day.”

He put 19 points on the Giants in that one, his scoring exploits and good looks making him the darling of Mad Men era Madison Avenue. Endorsement deals with Norelco Razors, Chevrolet, Jantzen clothing, Miller Lite and, of course, his beloved Marlboro, endured even after the NFL suspended him for the entire 1963 season for gambling. Over-fond of a flutter since sneaking into Churchill Downs to watch the races as a kid, he claimed to have placed only small bets with Barney Shapiro, a close friend who just happened to run the slot machines in Las Vegas.

The attendant whiff of scandal didn’t exactly jar with the roguish profile of the hard-drinking Lothario. After spending a week hanging out with Hornung in Green Bay, sportswriter Dick Schaap reckoned he averaged, “60 drinks a day, a couple hundred cigarettes, never went to bed before 4 in the morning, never went to bed alone, and never repeated himself.” Hornung complained 60 was an exaggeration, it was more like 20. Asked what it was like to share a hotel room with him, a teammate answered, “I never saw him, I roomed with his luggage.”

“This handsome chunk of manhood has such a magnetic personality that he can charm man or beast - or woman,” wrote Arthur Daley in the New York Times. “The gals gaze at Hornung with such calf-like adoration that he has gained the reputation for being a bit of a playboy…”

After the partying stopped, Hornung became a successful businessman and was married to Angela, his second wife, for 41 years. In 2016, his family sued Riddell, alleging the helmet manufacturer knew their product offered players no protection against concussion and brain damage. Before slipping into the cloying fog of dementia, he also wrote a reflective memoir, putting his celebrated debauchery into some perspective.

“I’m sure that during my playing days I wasn’t considered a good role model for the nation’s youth,” he wrote. “But the way times have changed, I’d look like an altar boy if I played today. I never beat up a woman, carried a gun or a knife, shot somebody, or got arrested for disturbing the peace. I never even experimented with drugs during the season. All I did, really, was seek out fun wherever I could find it. Everything was all tied in together - the drinking, the womanising, the partying, the travelling, the gambling. And, of course, football made it all possible.”

Manifesto of the Golden Boy.