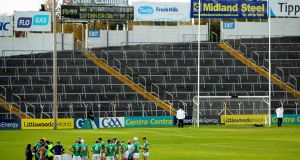 Waterford and Limerick were level heading into the first and second half water breaks in Sunday’s Munster hurling final.

The Déise had outscored Limerick 0-3 to 0-1 in the five minutes prior to both. The play was halted for two minutes for the first H20 stoppage, and for two minutes and 29 seconds for the second. They went on to lose the final quarter of both halves, 0-7 to 0-4, and 0-7 to 0-3. Outscored in the initial five minutes of each quarter – 0-2 to 0-0 in both.

Waterford will argue the speed and intensity they were bringing was diminished by the halts in play, but regardless of whether or not the end result would’ve been any different, the two breaks did alter the game’s momentum. Coming right in the middle of both halves, how could it not.

The GAA’s Covid-19 match regulations allow for a one-minute break midway through each half as to avoid players sharing water bottles during the match. The question is, what effect has this new and necessary rule had on the hurling championship thus far?

There’s been 13 examples of momentum swings either side of a water break so far in the hurling championship. In 10 of the 12 matches

In the Leinster final, Galway had won the five minutes prior to the second water break 0-3 to 0-0. Kilkenny hadn’t scored in 13 minutes. The teams gathered along the sideline with their coaches, took their break and assessed. Brian Cody team’s went out and scored 2-1 to Galway’s 0-2. That five-minute spell sent them on their way to what just minutes earlier had appeared such an unlikely victory.

Similarly Wexford in their qualifier defeat to Clare – they’d scored five of the six points before the second-half water break. Yet Clare came out and won the following five-minute period 1-1 to 0-2 en route to a seven-point victory.

Cork were gathering a degree of momentum against Tipperary, outscoring the reigning All-Ireland champions 0-3 to 0-1 approaching the second break for water. After the two teams convened by the dugouts and returned to their positions, Tipp’s two point-lead was quickly doubled as they outscored the Rebels 1-5 to 0-6 on the home stretch.

That’s all four matches from last weekend's hurling action. In total there’s been 13 examples of momentum swings either side of a water break so far in this year's championship. In 10 of the 12 matches.

In the round one qualifier encounter between Cork and Dublin, Mattie Kenny’s team outscored Cork 0-2 to 0-1 in the five minutes before the first-half water break. However, in the quarter which followed Cork doubled their lead, giving them a six-point advantage which they would maintain until the final whistle.

Earlier in the provincial championships, Clare were in the ascendancy 0-9 to 0-7 at the first water break against Limerick. They had registered 0-3 to Limerick’s 0-2 in the five minutes before the pause in play to rehydrate. But the Treaty County outscored Clare 0-2 to 0-0 in the following five minutes, and went on to win the three remaining quarters to claim victory by 10 points.

In their 13 point Leinster semi-final defeat, Wexford won both five-minute periods before the two water breaks. However, in the two five-minute periods which followed they were outscored by Galway, by a combined 0-5 to 0-1. That was one of only two games so far when both teams involved failed to each win at least one quarter. The other was Limerick’s win against Tipperary.

Games are now swinging back and forth far more frequently than we have seen in previous years. Despite several comfortable winning margins, no team has won every quarter thus far. Galway have come closest, losing only one - the final quarter against Kilkenny. Decisively. While Limerick are the only team yet to lose one of the quarters following the water break.

For the likes of Limerick last weekend, who found themselves on the back foot during a key stage of the game - in the very heart of the half when the match was really opening up - the new rules give them a two-minute (or more) breather. A reset, and a chance to get the tactics board out to figure out what had gone wrong and address it immediately. How well they use the time afforded is up to them, and Limerick appear to be maximising it.

Hurling has become a game of four quarters, and the respective managers of the six remaining teams are no doubt planning accordingly. Momentum is less of a factor, and the concept of starting and finishing a half strongly now applies twice as often and as much.

The crucial quarter so far this winter has been the second. In nine of 12 matches the team who wins the quarter before half-time goes on to win the match. Only once has an eventual winner lost the second quarter. The next most important quarter has proven to be the first, with seven teams winning it and subsequently winning the match. Only six – that’s half – of the eventual winners won the final quarter, while even less (four) won the third.

Similarly, in nine of the 12 matches the team who went on to win the game won the five-minute period after the first water break.

The goalposts have been moved for the 2020 hurling championship. So teams now need to maximise the four breaks, and target the new key periods in the match. For one year only.