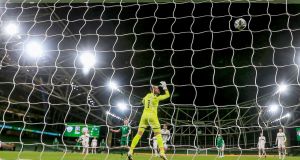 Became the third Ireland goalkeeper after Packie Bonner and Shay Given to reach 50 caps, but didn’t have much to do on his milestone appearance. An early save from Iliev wasn’t the tidiest but he was quick off his line to smother Ivanov on 30 minutes. He was nearly embarrassed by Kraev when trying to Cruyff turn in his six-yard box, but recovered just in time. Rating: 6

It says a lot that Dara O’Shea, in just his fourth international appearance, felt like one of the elder statesmen in this Irish side. Defensively solid, making a number of good clearances under pressure, he excelled going forward and his delivery from the right flank provided Ireland with arguably their best attacking outlet. Rating: 7

Once again it was hard to shake the feeling that Ireland’s leading centre half is low on confidence, and he produced another shaky display at the Aviva Stadium. A poor pass to Hourihane let Ivanov in during the first half, and he struggled to make his presence felt in the Bulgarian box, glancing his one decent chance wide. You imagine he’ll be happy to see the end of this international break. Rating: 5

Long looked uncomfortable at times against Bulgaria, particularly when it came to playing the ball out from the back. He was harshly booked after just 10 minutes for climbing on Iliev on halfway but while he looked shaky in possession he often recovered well and made some vital clearances. One of the few Ireland players to come out of this window in credit. Rating: 6

This was a tough introduction to international football for the 24-year-old, who was often caught out of position by Bulgarian captain Popov in the opening half. However he stuck at his task and was always looking to get forward, even if his final ball was poor. Having played just one game for Swansea this season this was a big ask, and it was no surprise to see him go down with cramp late on. Rating: 5

Hourihane started as the deepest of Ireland’s midfield three, picking up the ball off the centre backs, but he struggled to influence things and dictate the tempo throughout. He was exposed defensively on the counterattack but looked better as the game progressed and he was able to play higher up the pitch. His delivery towards the death was good, but Ireland couldn’t capitalise. Rating: 5

Produced the standout moment of the match, as he cut inside in the second half and rattled the crossbar with a dipping, swerving effort. It would have been some way to end Ireland’s goal drought. Away from that his set-piece delivery was good and he was always looking to pass forward through the lines before he ran out of legs and was ultimately forced off. Rating: 6

The 19-year-old Knight – who has been an ever-present for Derby this season – grew into the game more the longer it went on. He provided a tenacious presence in the first half and showed his ability on the ball in the second – his driving run and perfectly weighted pass set up Curtis for the best chance of the match, which he blazed over. Rating: 7

It was a strange evening for Horgan, who was on the periphery for much of the first half and was reduced to trying to harry Bulgaria off the ball. A switch to the right wing briefly saw him come to life and he created a chance for Collins but he soon drifted to the edges of the game again and was the first man hooked. Rating: 5

The Luton Town forward spent much of the first half dropping off to find the ball and taking a lot of physical punishment in the process. He missed two good headed chances towards the end of the first-half and went close early in the second. His performance was reflective of Ireland’s as a whole – plenty of endeavour without a clinical edge. Rating: 6

It was a frustrating night for Ireland’s front three, who were often isolated and didn’t see much of the ball. Curtis went close early on with a deflected shot from the right of the box which looped just wide of the back post but then spurned Ireland’s best chance in the second half – his first touch from Knight’s pass was perfect, his second sent the ball into Row Z. Rating: 5

That Kenny didn’t make a sub until nearly 70 minutes reflects how threadbare his squad is at present, with the likes of Knight having to play the full 90. Josh Cullen was eager to get on the ball when introduced while Jack Byrne helped raise the tempo with an eye-catching late cameo. Rating: 5

It’s been an international window to forget for Kenny, who has refused to feel sorry for himself despite being faced by problem after problem. A goal tonight would have lifted the mood and seen the year end on a high, but ultimately it’s not fair to read too much into recent results given the constraints he has had to work under. Bring on 2021. Rating: 6