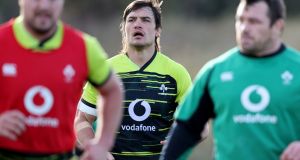 A second successive call-up to the Ireland squad for Quinn Roux is a deserved recognition for taking control of his personal development, according to Connacht forward coach Jimmy Duffy.

Roux, who made his debut for Ireland in 2016, has continued to work his “socks off” since his move to Connacht in 2014 from Leinster.

With 12 appearances for Ireland prior to this season, the 6’6” South African-born lock’s career in an Irish jersey has been sporadic, making only his first Six Nations start in February last year.

Injury played its part, but last weekend he grabbed another opportunity. Roux scored Ireland’s opening try against Wales, and, coupled with his scrum strength and his on-field contributions, he has earned another call-up for this weekend’s Nations Cup international against England.

“The real big thing with Quinn is that he has really taken his development into his own hands,” says Duffy. “We try to challenge him and assist him in the system as much as we possibly can, but guys who make that international set up it’s really up to them to look after their drive and ambition, and how hard they work, because it takes a lot of effort to get to that position.”

Duffy says Roux’s reselection has given Connacht a “boost, collectively and personally”.

“It is a credit to that young man. He’s a tight-head lock that calls lineouts, which is a very rare commodity, and he’s been consistently good for us, and has captained the side on a number of occasions.”

Connacht’s Finlay Bealham, Bundee Aki, Dave Heffernan, Kieran Marmion, Ultan Dillane and Jack Carty have all been involved in Andy Farrell’s set-up this season, which he says, has been a real boost to the Connacht squad.

“It is one of the drivers of our club to get as many people as we can in the Irish squad, so seeing him play so well last weekend was really pleasing. Where Irish rugby is at the moment, there is great depth being built. Whether the club or the national side, it makes everyone better because you have to be on your mark, A to get entry to the team, and B to perform.

“It is an exciting time for Irish rugby. There’s a new crop of young players putting pressure on serious athletes across the four provinces.”