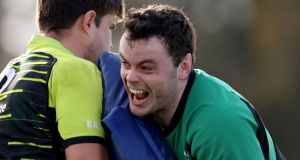 Ireland are up and running in the Autumn Nations Cup, after they beat a beleaguered Wales side in the opening match of the new tournament last week.

Victory in Dublin has steadied the ship for Andy Farrell’s side following a chastening night in Paris last month, which saw their Six Nations hopes vanquished by France.

Beating Wales is never to be sniffed at, but last Friday’s win came over a side in transition who had lost their five previous Test matches under new coach Pivac.

This weekend’s trip to play England - at Twickenham - is the acid test, and should provide a fairer assessment of where this Ireland side currently stand under Farrell.

Recent meetings between the two sides have made for pretty grisly viewing from an Irish perspective, with Eddie Jones’s side bullying their way to three comprehensive victories in a row.

Another huge physical challenge awaits Ireland this weekend, and it will be a big yard stick for Farrell and his side if they can match it in London.

Here is everything you need to know ahead of Ireland’s clash with England, in the second round of the Nations Cup.

The second round of fixtures in the Autumn Nations Cup, a tournament created to plug a gap the coronavirus pandemic has left in the international calendar.

All of Ireland’s Autumn Nations Cup fixtures are being shown free-to-air by RTÉ and Channel 4 - Saturday’s match is on RTÉ One. You can also follow all of the action via the Irish Times liveblog from around 2.15pm. The rest of the Autumn Nations Cup matches are being broadcast by Premier Sports in Ireland, while in the UK Amazon Prime have dipped their toe into the rugby market.

So, what happened last weekend?

Ireland against Wales was the weekend’s heavyweight clash, and the tournament started with a handsome win for the hosts in Dublin against a Welsh side who are still adjusting to life post-Warren Gatland. Andy Farrell handed an international debut to James Lowe, while his compatriot Jamison Gibson-Park also impressed on his first international start. However, Ireland’s win was overshadowed by an injury to Johnny Sexton who will miss Saturday’s trip to Twickenham.

A day later Scotland came from behind twice to see off Italy in Florence and chalk up their fifth-consecutive Test match victory (28-17), before England routed Georgia at Twickenham, winning 40-0. Those who were looking forward to seeing France take on Fiji were left disappointed after the fixture was cancelled due to a coronavirus outbreak in the Fiji squad. Les Bleus were subsequently awarded a 28-0 victory on Tuesday.

Fiji’s second clash away to Italy in Ancona was cancelled on Tuesday after they recorded 29 positive Covid-19 tests - the Pacific Islanders’ participation in the rest of the tournament is now in doubt.

One of Andy Farrell’s key decisions has come at outhalf, with Ross Byrne given the nod to replace Sexton ahead of Billy Burns, who starts on the bench. The veteran Keith Earls has been called into the back three, with Hugo Keenan retaining his place at fullback and Lowe making his second start on the wing.

Farrell has also kept faith with Gibson-Park after his impressive showing against Wales, while Quinn Roux is retained in the engine room. Iain Henderson and Jacob Stockdale are both fit again but start on the bench. James Ryan will lead Ireland out at Twickenham.

Eddie Jones has included George Ford in his matchday 25, with the outhalf set to return from an Achilles injury. Owen Farrell won’t be partnered in midfield by Manu Tuilagi, with Ireland’s recent tormentor-in-chief on the sidelines with another serious injury. Lewis Ludlam has also been drafted in - reinforcements for the physical battle ahead.

In Ireland’s last 10 meetings with England, they have won three - the most recent coming as they sealed the Grand Slam on a memorable day at Twickenham in March 2018. The two sides have met three times since, with England winning all of them - twice in the Six Nations and one a World Cup warm-up game.

It has been the manner of the defeats which have been sobering for Ireland, with England repeatedly dominating physically. Farrell’s side must stand up to Eddie Jones’s bully boys if they are to sack Twickenham on Saturday. . .

Standing up to the bullies. . .

In his column this week Gordon D’Arcy has said he has no doubt Ireland will stand up to England’s bully boys this weekend - but he feels they need to be cute if they are to secure a famous win against the old enemy.

“We do not want open warfare with this England pack. We want to embrace the oldest cliches in rugby. Punch clever. Move them about the park. Catch them off guard. Bring them to places they do not want to go.

“Box kicking and mauling will not work. The team is already moving away from that attitude but a reversion to old ways will lead to a tortuous afternoon.”

A case of when, rather than if

Even though James Ryan’s captaincy on Saturday has been necessitated by injury, it was only a matter of time before he led Ireland out, writes Gerry Thornley.

“The Australian cricket team’s general philosophy toward captaincy was simply to anoint the team’s best player, and Ryan is able to lead by deed due to the sustained high quality of his work, so much so that it was actually a shock to see him drop the ball last Friday.

“But in due course one imagines he’ll be well able to put the fear of God into his team-mates as well.”

Pascal Gaüzère is in charge on Saturday.